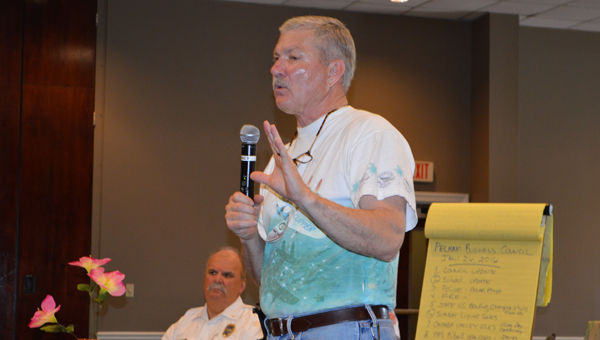 PELHAM— The city’s sign ordinance was a topic of discussion at the quarterly Business Council meeting April 19.

A concerned resident brought up the fact that the ordinance is not being enforced on the weekends, and U.S. 31 is flooded with signs from Friday evening to Monday morning when the sign enforcement officer is off duty.

Mayor Gary Waters said this has been an issue for about three years. The sign enforcement officers do the best they can, he said, but some business owners take advantage when they know the officers are off duty.

“The chronic problem we have is among businesses that know they are violating the sign ordinance and yet they do it anyway,” Waters said. “So it’s off premise advertising that is not allowed according to the ordinance, unless you have a billboard on I-65.”

The ordinance was initially created by a committee as a way to eliminate the flashing portable signs businesses used to position in their parking lots, Waters said. While the committee was gathered, they also outlawed many other forms of advertising.

“I believe it is heavy-handed, but it’s going to take you guys to tell us what we need to do to change it,” Waters said. “We do need your help. We don’t know what you need. There is no perfect way to do it.”

He said it’s more effective for the business owners to address the Pelham City Council directly with concerns in the ordinance rather than Waters, because he is not a business owner.

There are many kinds of sign ordinances across the state, Waters said, and he recommended the business community form a committee to tweak the existing ordinance.

“I’ve never owned a business. I don’t know what you need,” Waters said. “I would like a clever gathering of business owners to take a copy of that sign ordinance (and) give us some reasonable amendments and changes.”