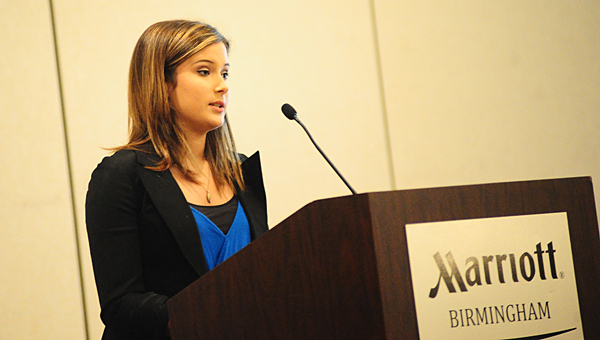 BIRMINGHAM – Emma Smith, a senior at the Shelby County College and Career Center in Columbiana, wasn’t sure what her future looked like three years ago.

As a new student at the College and Career Center, her grades weren’t the best and she had “no idea” what she wanted to do after high school.

Three years later, she did something no other student in the county or state has ever done.

Before even receiving her high school diploma – which will happen next month – Smith has received her license to practice cosmetology in Alabama. She is the first high school student in the state to earn such a license.

“When I came to the CCC as a sophomore, I had no idea what I wanted to do, and I was struggling academically,” Smith said. “Since my first day at the CCC, I have been accepted and nurtured academically. I have thrived at the CCC.”

Foksinska praised the school system for welcoming her and helping her grow as a student after she moved to Shelby County from Poland with her family.

“I didn’t speak a word of English,” said Foksinska, who is currently taking seven Advanced Placement classes and is set to graduate as valedictorian in May. “With the help of my teachers and peers, I felt welcome. I felt someone was always there, and someone was watching out for me”

Foksinska praised Bittinger, a math teacher at OMHS, for helping her reach her goals.

Bittinger attributed much of the school system’s success to its programs focused on continuous learning among teachers.

“I believe if you’re gong to prepare students, the teachers have to be prepared too,” Bittinger said.

Spates, who recently sang the National Anthem in the movie “Woodlawn,” is a product of the school system, and now has two children in the system.

“I can’t say enough about the education they are receiving. They love school,” Spates said. “My children feel that (school) support, and they are challenged so they will be prepared for their journey.”

Shelby County School Superintendent Randy Fuller praised the system for having the highest average ACT score of any county school system in the state, and touted the system’s 95-percent graduation rate.

“These students are graduating and moving on, and they are prepared for their journey. That’s powerful,” Fuller said. “I don’t think any other county school system in Alabama can compare.

“Now you see why I’m the happiest superintendent in the state of Alabama,” Fuller said.