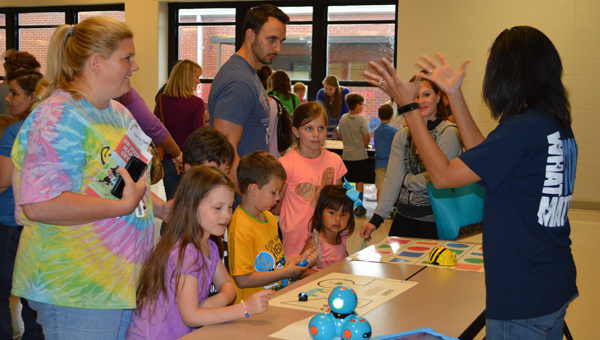 From 5 to 7 p.m., guests explored various science, technology, engineering and math-related activities in the school’s lunchroom.

“This is a way to get the parents involved and see what we are doing—the kind of activities we are trying to do with their students to get them exposed to science, technology, engineering and math,” said STEM instructor Denise Taylor.

Taylor and Sonya Eggleston run the STEM program at Calera Elementary, and this STEM Night is something they said they plan on hosting every year.

This year, the science lab was transformed into a STEM lab, and the students participate in STEM lab once a week, according to Taylor. She said STEM education has been around for a long time, but only recently moved to the elementary school level.

While some surrounding counties had already started STEM labs in the K-2 schools, Taylor said Calera is the first of its kind among Shelby County Schools.

Stations were set up all over the cafeteria with activities, such as parachutes, flying machines, stomp rockets, paper airplanes, straw gliders and more. The students also created homemade goo.

“We are just trying to build up our program, trying to show people what we are doing with students and trying to open up a whole range of opportunities for our students and let them see the different career fields they may be interested in,” she said.

She added that she hopes to expand the amount of activities next year and bring in a round of brand new STEM projects for the families.

There were also booths set up for parents, featuring the various programs available to them and a literary magazine booth. Taylor said many students submitted entries for the literary magazine, and every student who entered placed at some level.

The school also displayed the 10 grants they earned through the Education Foundation for Calera Elementary School.

Overall, Taylor said they are excited about the STEM program. She said everyday is another opportunity to challenge the students.

“We are very excited,” she said. “We visited a lot of other schools; we were selected to present at the National Blue Ribbon Conference. We were very honored about that, and we are just reaching out in every way we can to try to expand and make it better. We want to be the best program in Shelby County.”

Dr. Corey Hartman and his staff join South Shelby Chamber of Commerce members in celebrating the grand opening of the... read more