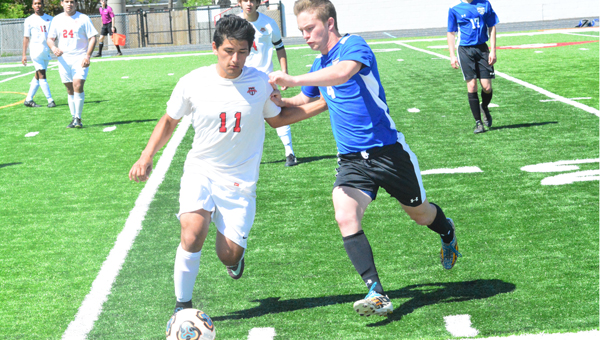 Kenny Rodriguez will return in 2017 to lead the Warriors as a junior. (File)

ALABASTER – Thompson’s 2016 soccer season is done. The Warriors ended the year with a 13-10-1 record, accumulating the most wins in a season since Rusty Cowley took over the program in 2014, and beat 5A No. 1 Helena on April 21 in their final game of the season via an emphatic 3-0 decision. Cole Hadley scored off a corner kick in the first half before Mike Jamison and Kenny Rodriguez both added goals in the second half to secure the win. The result was a positive way to go out for the best product Thompson has put on the field in recent memory, and was a statement on the kind of program Cowley is still trying to build at Thompson.

“We had quite a few returners, so we wanted to set the bar as high as possible,” Cowley said of this team and his expectations. “We knew that we had some really skilled and intelligent players, and as you are with your kids longer, expectations grow, they get more comfortable with what is expected. We could very well hang with anybody, which showed this season, especially in the Helena game.”

Thompson unfortunately falls victim to geography, with the two potential best teams in the state regardless of classification in Oak Mountain and Hoover residing in the Warriors’ area. The Warriors took Hoover to PKs on March 8 at home, eventually losing 0-0 (4-2), and played the Bucs close on the road as well, losing by a single goal that Hoover scored in the final 15 minutes. Oak Mountain whipped Thompson easily once 5-0, but the Warriors were tied with the No. 1 team in the state late into the second half the second time the two played, but gave up two late goals and lost 3-1.

While the losses to Oak Mountain and Thompson meant that the Warriors could not advance to the 7A playoffs, the season was far from a wash. Cowley came to Thompson as the JV coach in 2013 before taking over the varsity team in 2014. This senior class was especially close to Cowley, as they were his first bunch he coached from their freshman year through graduation, and will remember those relationships more than any win-loss indicators.

“More so than about the wins, this group of seniors were freshman when I first came here as the JV coach. So that’s a lot of close relationships I’ll be losing. They’ve done a lot to put us on the right track to compete with big teams and big programs. That’s the big thing from this year, is the relationships that have formed over the years with this graduating group of seniors that have been here doing the things the right way and putting their noses to the grindstone.”

Those seniors that are leaving the program are keepers Abel Perez and Alex Gamble, center backs Cesar Rivas and Philip Vaccarella, midfielders Brennan Yoder and Jason Gallo and forward Diego Gutierrez. Those seven helped take Thompson from a 5-17-1 team in 2014 when they were sophomores to the 13-10-1 competitive product that pushed two of the best teams in the state to the brink.

Looking ahead to next season the scoring load will be square on the slender shoulders of rising junior Kenny Rodriguez. Rodriguez, who has been on the varsity team since he was a freshman, is a talented and intelligent forward who has a nose for the goal. Classmate Cole Hadley, who started this season as a sophomore and grew into his role as the season progressed, will have to take some of the scoring load off of Rodriguez as well, and will join Rodriguez up front. Gavin Owen, Dion Bradley and Trevor Baldwin are all also returning in the midfield and across the back line to provide a good skeleton to build off of moving forward.

In three years as Thompson’s head coach, Cowley’s teams have a combined record of 29-36-2, but have achieved winning records in each of the past two seasons, and have always won more games than the year before.