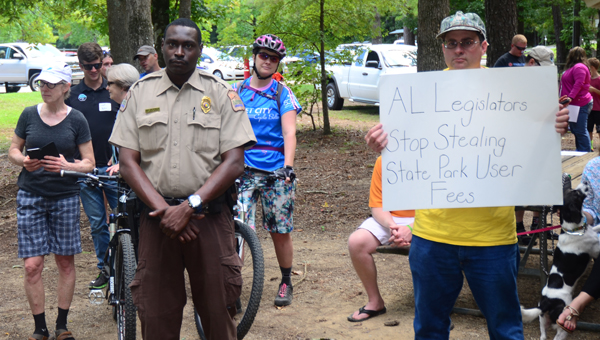 Supporters of the Alabama state parks attended a rally Sept. 12, 2015, to address transfers from state park funding to the general fund. A new bill would protect the park system’s funds from transfers if passed Nov. 8. (File)

Alabama residents will have the opportunity to vote on a constitutional amendment to protect the Alabama state parks system’s funding from being transferred to the state general fund during the Nov. 8 general election.

An April 25 press release announced the State Senate passed the bill March 22 and the Alabama House of Representatives voted in favor of it on April 20. After Gov. Robert Bentley signs the bill, it will be listed on the Nov. 8 ballot.

“It will affect the entire state park system,” said Oak Mountain State Park Superintendent Kelly Ezell. “The funds that we take in will be protected, and the Legislature will not be able to move those to the state fund.”

As a fee-based operation, Oak Mountain State Park—and all Alabama state parks—makes about 80 to 90 percent of its revenue directly from guest fees. Unlike most state agencies, the state parks do not receive money from the state’s general fund.

Ezell said this bill would keep the funds earned through by the park, such as entrance and lodging fees, within the park system.

“We are very happy about it, and this will be a great opportunity for Alabama state parks to make some of the much-needed improvements and plans,” Ezell said. “Right now, we are not able to plan from year-to-year. To be able to make plans is a great thing.”

Last year, there was public outcry when five state parks closed and others were forced to cut services and limit hours of operation.

The April 25 press release stated the public responded as a result of the Alabama Legislature transferring $15 million from the state parks budget to the general fund budget over the last five years to help finance other areas of government.

Members of the Alabama State Parks Partners, a coalition of park users and organizations interested in supporting the park system held a rally at Oak Mountain State Park Sept. 12, 2015, in response to the funding issues.

This rally was held in conjunction with other rallies at various state parks in Alabama. Ezell said she believes this new bill, which “an overwhelming majority of state lawmakers voted in support of,” was a direct result of these rallies.

“The state parks belong to the people of Alabama, and the people will now be able to vote to help ensure our state parks system stays available and vibrant for future generations,” said State Senator Clay Scofield, a sponsor of the bill. “We received thousands of phone calls and messages urging us to fund our state parks. We listened. Now I urge you to reach out and thank your legislators for taking action to protect our amazing parks and vote in favor of the amendment in November.”

By NEAL WAGNER / Managing Editor COLUMBIANA – A judge has rescheduled a hearing to determine if a 17-year-old Alabaster... read more