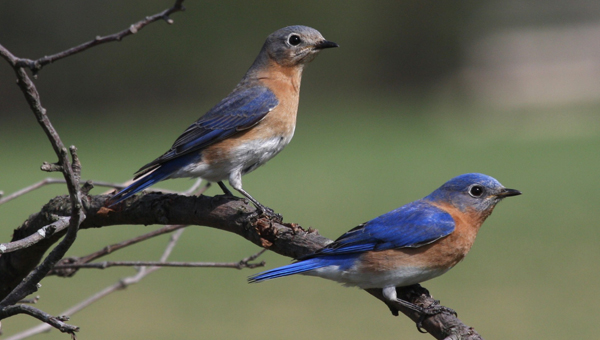 Eastern bluebirds abound at Oak Mountain State Park and have experienced a population increase of 2 percent per year because of conservation efforts. (Contributed)

These beautiful blue birds with rusty red patches are easy to spot, especially driving down John Findlay Drive past the golf course.

Eastern Bluebirds are related to other thrushes such as the American Robin, though their size is relatively smaller, only about 2/3 the size.

Eastern Bluebirds are different colors based on gender. Males are bright blue with rusty red patches, while the females are more of a grayish blue with hints of rusty red.

Bluebirds are about 6 inches in size, but easy to I.D. based on their color.

We have many bluebird nest boxes located throughout the park, allowing these birds to have plenty of places to have their babies and rest their wings.

Nests are lined with grass, feathers, stems and hair and protect anywhere from three to seven light-blue eggs.

Incubation of the eggs takes about 13 to 16 days, after which the female will brood them for seven days.

At about 15 to 20 days after hatching, the fledglings will leave the nest.

The lifespan of a bluebird can range from six to 10 years, though most only live about one year. Oftentimes, bluebirds will have more than one hatch of eggs in a year.

Once in decline due to introduced species such as the European Starling and House Sparrows, their population has increased by about 2 percent per year thanks to the conservation efforts of many.

Do you want to attract bluebirds to your yard? Offer them a great nesting box but also offer them some source of insects, especially mealworms, caterpillars, crickets and spiders.

They don’t eat seeds from bird feeders. In fall, you might see them eating berries from mistletoe and holly.

Please remember that you keep Alabama State Parks open by visiting them. Thank you for your support.