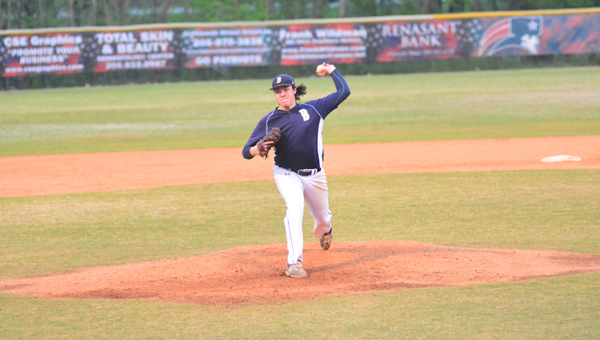 Sam Strickland and the Briarwood Christian Lions lost a pair of games to Oxford on April 22, knocking the Lions out of the 6A playoffs. (Reporter Photo / Baker Ellis)

OXFORD – After losing two of three games to Homewood from April 12-15, the Briarwood Christian Lions were on the road for the first round of the 6A playoffs, traveling to Oxford to take on the 6A Area 10 champions. The Briarwood bats never truly woke up in its series with Oxford, scoring just two runs in two games, losing in two games, 6-0, 6-2, ending their season.

The Yellow Jackets scored at least one run in each of the first four innings, including three runs in the in the bottom of the third, to take a 6-0 lead midway through the game, eventually winning by that margin. Sam Strickland pitched a complete game for Briarwood, throwing 99 pitches over six innings, giving up six runs, only three of them earned, on seven hits and struck out five. The Lions left runners on third base in the top of the third and the top of the fourth, but couldn’t ever push a run across the plate.

Carson Eddy, Strickland and Luis Fuentes each had two hits on the day for Briarwood to lead the Lions from the plate.

The second game of the day went much like the first, with Oxford scoring runs in the second, third, fourth and sixth innings, taking a 6-0 lead entering the seventh inning. Briarwood scored two runs in the bottom of the seventh, but it was much too little, much too late as the Lions lost 6-2, ending their season.

Eddy hit a single in the bottom of the seventh inning with two runners on base and one out, scoring Logan Whittlesey from third, before Jake Morris hit into a fielder’s choice, which scored Kolby Kwarcinski. However, those two runs were all Briarwood could muster.

Whittlesey threw the first 5.1 innings for Briarwood, giving up six runs, although only one of them was earned, on five hits while striking out two before Michael Hiers came in to throw the final 1.2 innings.

Briarwood ended the season with a 21-11 record.