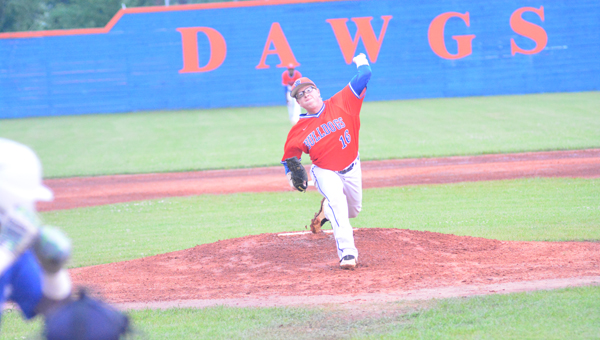 Zack Thompson threw a complete game shutout for Montevallo in the Bulldogs’ playoff opener against Childersburg on April 22. Montevallo beat the Tigers in two games to advance in the 4A playoffs. (Reporter Photo / Baker Ellis)

MONTEVALLO – Montevallo, the 4A Area 7 baseball regular season champion in 2016, hosted Childersburg, the 4A Area 8 runner-up, on April 22 in the first round of the baseball state playoffs. After the first game’s start time was pushed back by an hour and a half due to weather, the Bulldogs eventually took care of business against the visiting Tigers, beating Childersburg in two games by scores of 11-0 and 13-7 to advance to the second round of the playoffs.

“I felt like all-in-all we played pretty solid,” Montevallo head coach Trey Simpson said of his teams’ performance in the first round. “We swung it pretty well both games and defended pretty well. We gave up too many walks in the second game, put ourselves in bad situations, but responded well.”

Zack Thompson took the mound for Montevallo to start the game and never left, as the Bulldogs needed just five innings to drum up a double-digit lead while Thompson kept the Tiger bata quiet. Thompson gave up just one hit on the day while striking out four and allowing no runs, moving to 7-1 on the year in the process.

The Bulldogs took a 3-0 lead in the top of the first inning of the second game when Jaret Yancey came to bat with the bases loaded and two outs and slapped a three-RBI double, clearing the bases and scoring Pintaro, Pickett and Hughes.

Montevallo used four pitchers in the second game, sending Nick Thompson, Yancey, Pickett and Pintaro to the mound at different points in the game. Zac Oden went 3-for-5 with a double while Hunter Nabors and Hughes both homered in the game to lead Montevallo from the plate.

Montevallo will play either Handley or Oak Grove in the second round of the 4A playoffs. Handley and Oak Grove split their first two games, and are playing a decisive game three today at 3 p.m.

Helena sweeps Sylacauga in opening round of playoffs

The Helena Huskies baseball team celebrates after sweeping the Sylacauga Aggies in the first round of the playoffs on Friday,... read more