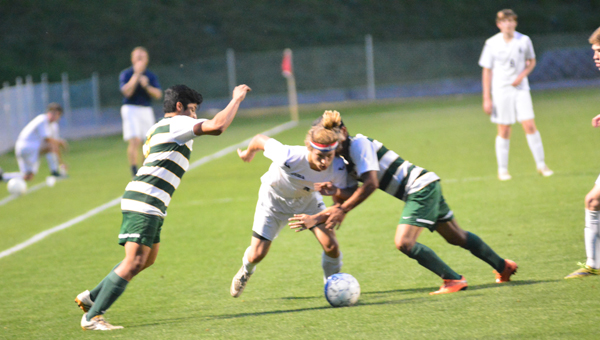 The Briarwood and Pelham boys soccer teams are two of the 13 Shelby County teams ranked in the final regular season soccer poll. (File)

The 2016 soccer playoffs begin on April 30, and the final regular season soccer rankings were released on April 25, which included 13 teams from Shelby County. The boys and girls from Oak Mountain, Spain Park, Thompson, Briarwood and Indian Springs made appearances on the list while the boys’ teams from Helena and Pelham and the girls from Chelsea also made appearances on the final regular season rankings.

The boys from Oak Mountain and the boys from Indian Springs stayed put at the No. 1 slot in their respective classifications, as they have for most of the season. Oak Mountain, at 23-0-2 as of April 25, is one of two undefeated teams left in the state, and the Eagles remained the No. 1 team in the state overall for another week. The girls from Oak Mountain, fresh off their 1-0 victory over previous overall No. 1 Vestavia Hills, took over the state’s top rank once again at 19-3-1. The girls from Indian Springs, at 17-3-1, remain the No. 1 team in the 1A-3A class as well.

The boys from Helena dropped from the top 4A-5A team down to No. 2 after getting beat by Thompson 3-0 this past week. The Huskies finished the regular season with a 13-7-2 record and will host the opening round of the playoffs as they try to make a second-straight trip to Huntsville. The Chelsea girls are also ranked second in the girls’ 6A poll, falling in behind John Carroll Catholic, as they have for much of the season. Chelsea will host Homewood on April 30 in the first round of the 6A playoffs.

The Spain Park girls came in as the No. 5 ranked team in Class 7A while the Thompson girls are ranked eighth. Thompson is out of playoff contention, as the Lady Warriors compete in the same area as Oak Mountain and Hoover, while Spain Park is also in danger of missing the playoffs altogether after starting the season out at 13-0-1. The Lady Jags, at 14-4-2 (2-3) as of April 26, will play Mountain Brook on April 26, and have to win that game to get into the playoffs. The Thompson boys, also out of playoff contention, are ranked as the No. 9 team in 7A while Spain Park is the 10th-ranked team in the class. Spain Park plays Oak Mountain in the first round of the 7A playoffs, which will take place on May 3.

The Briarwood boys come in as the No. 6 team in 6A while Pelham is directly behind the Lions at No. 7. Briarwood beat Pelham by a goal on April 19 to claim the 6A Area 10 title, and will host John Carroll Catholic in the first round of the playoffs while Pelham will travel to Homewood and face the 6A No. 2 Patriots. The Briarwood girls, at 5-9, are currently ranked as the No. 8 team in 6A as well.