The first school of Pelham, Ala., was built in the 1870s near the L&N Railroad and the Asheville and Montevallo dirt road.

It had one large room and a small music room. 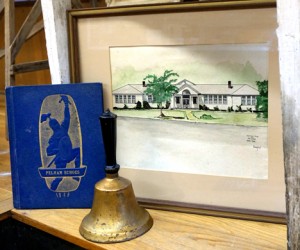 This 1949 Pelham Echoes yearbook along with a school bell were donated by John Ward Hinds of Spanish Fort to the Kenneth R. Penhale City of Helena Museum. Also on display is a watercolor entitled “School Days at Pelham 1940-1965,” signed Conger. (Contributed)

The pupils of Pelham School then were of the families of the Densons, Costs, Coates, Cross, Powers, Powells, Paynes, Bishops and others.

Early teacher Mr. J.W. Ellenburg moved to Pelham in 1891. He was noted as “a devout Christian who was interested in the souls and morals of each pupil. He treated poor and wealthy alike.”

Ellenburg encouraged the interest of the community to build a new school building. He was invited back by the students in 1940 to put on a play about the history of the school for a reunion that year.

In 1949, Pelham School had four classrooms, an auditorium and lunchroom, restrooms, running water and electric lights and five teachers in six grades. A “very active PTA” accomplished much for the school financially and otherwise.

By 1949, the Pelham school building “faced a busy highway on which there was much traffic regarding the affairs of men. It is busy training, educating and inspiring the girls and boys of this community to assume their share of these affairs when the time comes.”

Shelba Dean and Paul Yeager presided as Queen and King of the second grade and that she learned to double jump rope with the sixth grade girls. By sixth grade, she was Class President.

Her classmate, Billie Sue Winfrey, predicted Shelba Dean’s future to be “known as the best dancer and singer in the state and go on to a contract in Hollywood!”

Other mentions in the Class Prophecy – many tongue-in-cheek – included:

Troy Wideman in director of a Quiz Program.

J.D. Scott always wants what he wants, when he wants it. He is now looking very important—the town dog catcher.

Gloria Moore, who was certainly a chain talker, is now quiet as a mouse. Her doctor has ordered her to use her voice as little as possible.

John Martin, who always knew all the news, is now a reporter for The Birmingham News.