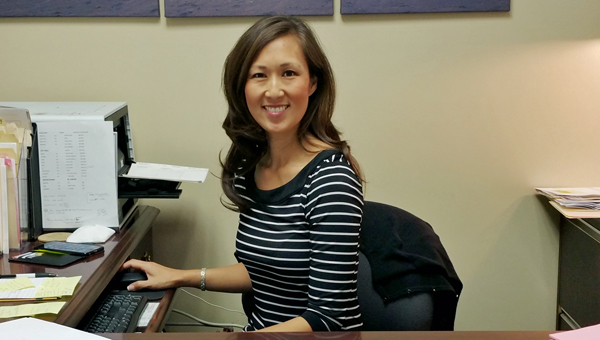 Elizabeth Smith sits in her office at Columbiana City Hall. Smith is the new marketing director for the city of Columbiana. (Contributed)

Disciplined and dedicated are two ways to describe Elizabeth Moody Smith, who recently took the job of marketing director for the City of Columbiana.

Her life has been full of achievements, from her early days of studying ballet at the Alabama School of Fine Arts, to being owner of her own dance studio in Calera.

The mother of two, Smith sold her dance studio in Calera a few years ago in order to spend more time with her family.

But Smith missed the social interaction that came with being a business owner. Once her daughter was old enough to start school, Smith waited for the “perfect position” to become available.

“The marketing director position is such a fun job,” she said. “Every day I meet someone new and get to learn and promote our great city. There are so many great things happening and I’m just thrilled at the opportunity to be part of it, plus I can literally walk to work from my house. You can’t beat that.”

Smith said she has lived all over the state, but considers her hometown to be Greenville, Ala.

Born in Seoul, Korea, she was adopted by Cecil and Patricia Moody, who raised her along with nine other children.

Excellence seems to be the norm for Smith, who graduated from McKenzie High School as valedictorian of her class. She graduated from the University of West Alabama where she received her B.A. in Business Administration with a minor in Business Management.

During this time she was Miss University of West Alabama and competed in Miss Alabama, where she promoted her platform of adoption.

Smith went on to marry her high school sweetheart, Chris. In 2005, they welcomed a son, Branson, and in 2009 their daughter Berkeley.

Smith developed a love of Columbiana when she would come to visit her father, who moved here in 2005. Her visits became more frequent, leading her to attend church in Columbiana.

In 2007, the Smiths made the move to Columbiana, which they describe as being like Mayberry.

“We instantly loved the small town with a taste of country atmosphere and the people,” Smith said. “Plus you can be in the city in less than 30 minutes.”

While only in her new job a short time, Smith has already found a city project that she is excited about.

“There is so much going on in our sweet little town,” she said. “One of the most exciting projects is the Main Street Alabama Project.”

“Main Street builds on the authentic history, culture and attributes of specific places, to bring sustainable change,” Smith said. “I think all this positive change would only make our city even better and stronger.”

Making citizens aware of what Columbiana has to offer, and attracting new residents and businesses are goals Smith has in mind.

“I absolutely love the position,” she said. “I’m excited to come to work every day and meet someone new and make plans to make Columbiana the best it can be. From the words of Mayor Handley, ‘There’s always something happening in Columbiana.’”

By SANDRA THAMES / Community Columnist Beth Davis was born in Pittsburgh, Penn., but spent most of her life in... read more