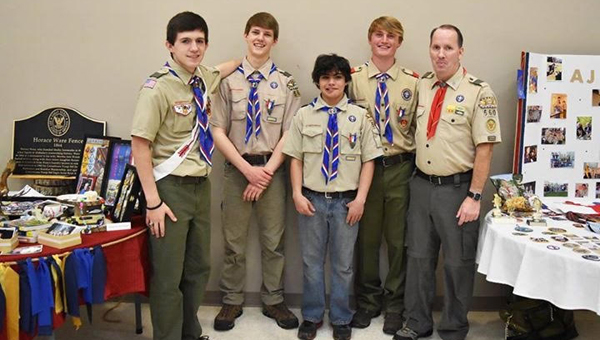 It’s an honor that less than 2 percent of Boy Scouts will ever receive, but on April 10, three local scouts from Columbiana Troop 560 were elevated to the rank of Eagle Scout.

An Eagle Scout Court of Honor was held at First Baptist Church of Columbiana for Owen Barnes, A.J. Cole and Ryan Harmon. Eagle Scout is the highest advancement rank in Boy Scouting.

For Troop 560 Scoutmaster David Davis, the accomplishments of these three young men means so much.

“Two of the boys I’ve been working with since they were 6 years old,” said Davis, who was in attendance at the ceremony despite a recent illness. “I wasn’t going to miss this for the world.”

Davis has good reason to be proud of these new Eagle Scouts, for each one truly made a difference in their community through their individual Eagle Scout projects.

Each of the three projects required hours of hard work, with each scout raising their own funds.

A.J. Cole’s project was to install trolley stop signs for the city of Columbiana’s trolley route.

Owen Barnes’ project was in Shelby, where he surveyed and plotted the Old Shelby Cemetery.

The projects undertaken by Cole and Harmon were the result of brainstorming with Columbiana Mayor Stancil Handley, who spent time with each scout discussing the needs of the city.

Handley has served as Scoutmaster for Troop 560 in the past. He spoke during the ceremony about the exemplary qualities possessed by Cole, Harmon and Barnes.

“I can testify to the fact that these boys are what you want an Eagle Scout to be,” he said.

Handley said that Troop 560 has always been responsive to the needs of Columbiana. “Not all cities enjoy a troop as active as the city of Columbiana does,” said Handley, who was appreciative of the great effort put forth by each of the three scouts.

“Making the rank of Eagle Scout is as coveted an award as there is in existence for somebody at the age of 17 or 18 years old,” he said. “It is one of the greatest accomplishments that can be achieved at that age.”

Before concluding the ceremony, Scoutmaster Davis reflected on the time spent with Barnes, Cole and Harmon through the years.

“I would not give up anything in the world for the amount of time we spent together,” Davis said, explaining that he thinks of each as a son. “If I had to do it all over again, I’d do it in a heartbeat.”