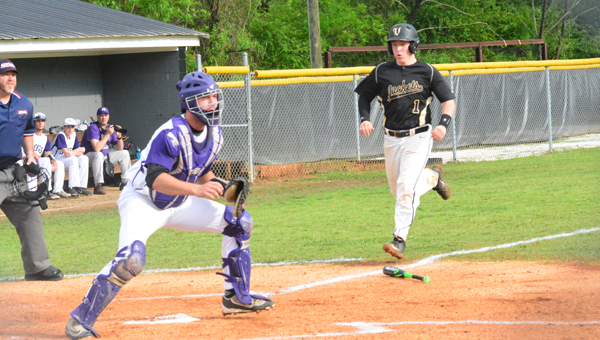 Matthew Swift scores Vincent’s first run against Ranburne in the first game of the Yellow Jacket’s opening round playoff series. Vincent beat Ranburne two games to one to advance in the 2A playoffs. (Reporter Photo / Baker Ellis)

VINCENT – Vincent, the winner of 2A Area 9 this season on the baseball diamond, welcomed in Ranburne, the runner-up from 2A Area 10 on April 22 for a first-round playoff series. The Yellow Jackets, a year after not making the playoffs, won the area going away this season, giving them the right to host the first round of the playoffs, and beat the visiting Bulldogs in three games to advance to the second round of the playoffs.

The Yellow Jackets scored three runs in the first two innings of the game to take a 3-0 lead, and Ethan Davis made sure the three runs were enough to carry Vincent to the opening game win. Davis pitched a gem, throwing a complete game for the Yellow Jackets, tossing 90 pitches over seven innings while giving up just one hit and striking out eight.

Matthew Swift scored the game’s first run in the bottom of the first after Jordan Smith reached base via a fielder’s choice and the Ranburne first baseman made an error on the play. The 1-0 lead held until the second inning when Brett Burrage and Chris Carlisle scored on a two-out error by the Ranburne shortstop, giving Vincent three unearned runs, which ended up being enough to win thanks to Davis’ dominating effort. The Bulldogs had one runner advance to third base in the game, but overall Davis took care of business, giving the Yellow Jackets a 1-0 lead in the series.

Vincent fell in an early 2-0 hole in the third and final game of the series when the Bulldogs knocked two top-of-the-first-inning runs across the plate, but the Yellow Jacket bats erupted for seven runs during their first two innings at bat, taking a 7-2 lead into the third inning and never looked back, eventually winning by a 9-2 margin.

While Vincent had managed just five combined hits over the first two games, the Yellow Jackets had 14 hits in the third game alone. Chris Phillips went a perfect 3-for-3 from the plate while Carroll, Smith, Fincher and Carlisle each had two hits to lead Vincent from the plate.

Swift pithed a complete game for Vincent, throwing 118 pitches over seven innings, giving up just two runs on five hits while striking out 10 as the Yellow Jackets got the crucial game three win, keeping their season alive.

The Yellow Jackets will advance to play Randolph County in the second round of the 2A playoffs.