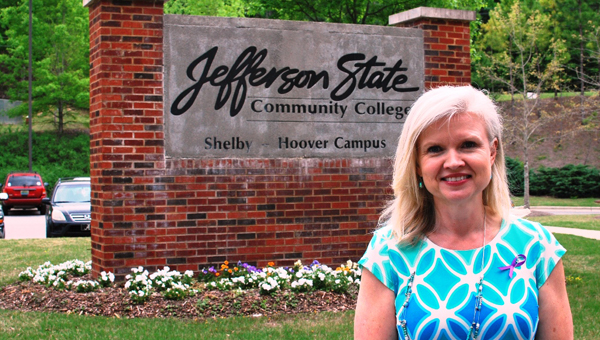 Dr. Angela Walker was recognized as the winner of Jefferson State Community College’s 2016 Outstanding Alumnus Award during a ceremony on April 21. (Contributed)

HOOVER—Dr. Angela Walker was announced as the winner of Jefferson State Community College’s 2016 Outstanding Alumnus Award during the annual Honors Convocation on April 21.

“I struggled in school due to a reading disability and issues related to ADHD, something I only discovered in my senior year of high school,” Walker said. “Neither of my parents graduated high school, so there was no expectation of college for me. In fact, a high school counselor once told me I wasn’t college material.”

Walker enrolled at Jefferson State and began taking classes in the child development program. During her second year, her mother passed away. She also found herself three months pregnant and in an abusive marriage.

After a difficult divorce, Walker continued her education at Jefferson State while working two jobs as a young single mother, without family support.

Continuing to overcome, Walker earned her associate’s degree from Jefferson State and was recognized as the Child Development Student of the Year. She became a preschool teacher and then a child development coordinator.

“Dr. Walker displayed remarkable perseverance to achieve academic success,” Jefferson State Community Relations Director David Bobo said. “Her educational journey was filled with so many challenges, but she continued working toward her goals. She is a wonderful example to anyone who faces adversity.”

After 10 years, Walker returned to school and earned her bachelor’s degree. She became an elementary school teacher and a reading interventionist, and earned national certification.

Walker has served as an assistant principal, principal, administrator and district leader.

She continued her education and recently earned a Ph.D. in early childhood education from the University of Alabama.

“Dr. Walker has made a difference in the lives of students for more than 25 years,” Bobo said. “I can’t imagine a better person to help students overcome their obstacles.”