The Hoover Board of Education interviewed two candidates for the Hoover City School’s chief school financial officer position during a special-called meeting on April 25. (File)

The Hoover Schools CSFO position was posted to the Alabama Association of Schools Boards website and the HCS website on Feb. 9. Qualifying applicants were interviewed and vetted to bring the list to two final candidates.

“We’ve not just vetted these individuals for the references they’ve shared, but we reached beyond that,” Murphy said.

Watts, a Hoover resident, started his career in private industry, serving as a senior accountant at Colonial Bank Group. He entered the public schools domain after 10 years in private industry during the state takeover of the Wilcox County School System in the 1990s, when he was hired as the system’s CSFO.

Watts later served the Birmingham City School System as CSFO for 13 years and resigned from the position in September 2015. 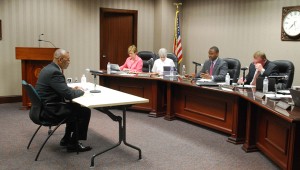 Jones has worked for the Jefferson County School System for nearly 20 years. She was hired as the assistant to the CSFO in 1997, and in 2006 she was promoted to CSFO, the position she still holds today. 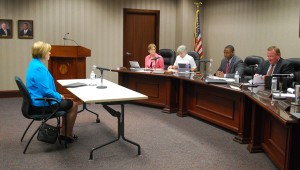 Hoover CSFO candidate Sheila Jones is interviewed by the Board of Education during an April 25 special-called meeting. (Reporter Photo/Molly Davidson)

Both candidates stressed the importance of clear communication.

“I think there are two very important things: Communications and data,” Watts said. “We have to look at a lot of data, we also have to communicate and collaborate with district leaders.”

“My direct line is readily available to anyone,” Jones said. “If I’m in my office, I pick up my telephone.”

Watts discussed the importance of collaborating across the school district to prioritize spending.

“We only have a certain amount of dollars…we have to decide what’s the best way to maximize those dollars,” Watts said. “There will have to be a lot of compromise and collaboration…I would like to sit down with the superintendent, with the board to determine how much we could shave off in the first year.”

Jones noted money saving possibilities such as debt refinancing and ensuring all faculty members are fully utilized, rather than cutting programs.

“I would not feel comfortable presenting a deficit budget. It’s a challenge to turn that around because you’re really limited in trying to increase revenues,” Jones said. “Obviously all your programs are needed, otherwise they would not be offered.”

Both Jones and Watts noted the importance of keeping the school system’s students a priority in decision making.

“Whatever action has a reaction, so there’s a student component (to the job),” Hoover BOE president Derrick Murphy said.

After an executive session following the two interviews, the BOE announced they would select a candidate to fill the position at a later date.

“I think we have two great potential candidates,” Hoover BOE Vice President Stephen Presley said. “I would like to sleep on this a little bit.”

“I concur, especially knowing this position is as important as it is given what our system is facing,” Veitch said.

Derrick Murphy said a new CSFO will be selected “no later than May 9.”