Houstons relocate to Alabaster for family 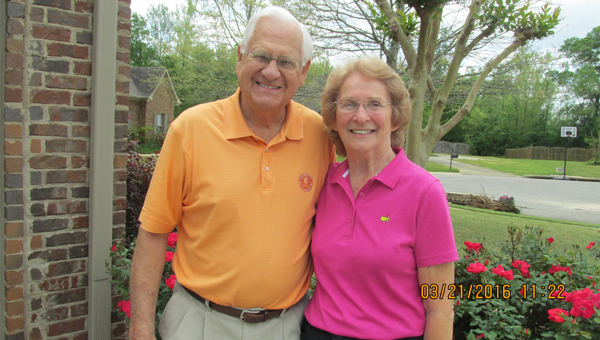 Harland and Donna Houston are much closer to their children since they retired in Alabaster. (Contributed)

As they got older their daughters insisted that they move from their residence in northern Ohio in order to be closer to one or the other of them.

The Houstons decided Alabama would be better for them, and now here they are not five minutes from one of their daughters.

They also have a condo in south Florida where they enjoy occasional trips.

The Houstons have two grandchildren, Aaron and Courtney, and a great-granddaughter named Riley.

After their marriage in 1954, Houston began a career in sales – oil companies, yellow pages and until his retirement was a salesman for a golf cart company.

Donna worked for 34 years as a purchasing agent and secretary for a welding supply company.

In the past the Houstons were avid golfers. “We were regulars on the golf course until we just got to be too old!” Houston says. (They certainly don’t look their age.)  “We have been truly blessed to be able to travel and see much of the world,” Donna says.

Hiking, biking and playing golf with daughter Jean and her husband (particularly in Colorado) are some of their most cherished memories.

The Houstons’ daughter Jean and her husband are both schoolteachers, so the summer was when Donna and Harland did much of their vacationing with them.  “August was our favorite vacation month,” Houston says.

Their favorite “big trip” was one they took on their own and included the Alps, Switzerland and Germany.

“We flew over there and then took an extended bus tour,” Donna says. “We saw many beautiful and interesting places, and it is amazing how different their architecture is from ours.”

The Houstons have settled in as fairly new residents of Alabaster and are happy to have found a “new home” in our city.

They are focused on enjoying more good years, maintaining their health and taking life “one day at the time.”