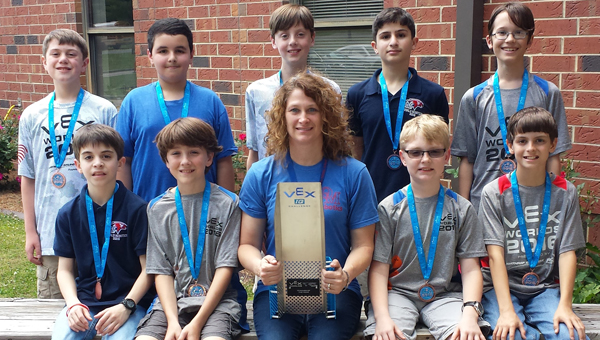 Whitehead has taught the Project Lead the Way STEM course at OMMS for the past two years and has sponsored six robotics teams at the school.

VEX Worlds is a gathering of the top robotics teams from around the world to celebrate their accomplishments and compete against the best of the best. The 2016 VEX Worlds event included nearly 1,000 teams from more than 400 VEX Robotics Competition qualifying tournaments held in cities around the world.

OMMS student Khaled Zuaiter introduced Whitehead as the winner of the prestigious award at the event.

“The Teacher of the Year award recognizes an educator who is passionate about learning and shows true dedication and leadership to his or her students,” Zuaiter said. “Our teacher exemplifies these ideals and is a role model to our team.”

Zuaiter said it was under Whitehead’s leadership that OMMS joined the VEX IQ Challenge Competition for the first time this year with six robotics teams.

“With her guidance and careful instructions, our teams have learned to think critically about the work we are doing and solve problems on our own,” Zuaiter said. “If we are struggling, she is always there to encourage us and develop our own solutions.”

Zuaiter also praised Whitehead for her efforts to support their teams by securing materials and funding for the robotics program through fundraising efforts.

“Ms. Sherri Whitehead is an inspiration to each of us at Oak Mountain Middle School, not only for the time and attention she gives our team, but also for sharing her passion for robotics with the intermediate school, the high school and even another nearby school,” Zuaiter said. “Her willingness to take time from her personal life to share her knowledge encourages each of us to use the skills we have to succeed in robotics and beyond.”

In the school’s first year of participation in the VEX IQ Championships, each of the six OMMS teams qualified for the VEX Worlds competition.

“We are so pleased to be part of Ms. Whitehead’s program and we know that without her we would not be here today competing,” Zuaiter said. “We are so grateful to Ms. Whitehead for sharing this experience with us. It is my great pleasure to present her with the 2016 Teacher of the Year award.”

The presentation of Whitehead’s award can be found at the 57:30 mark in a video found at Livestream.com/vrctv1/2016-worlds-opening-ceremony-Friday/videos/120562320.