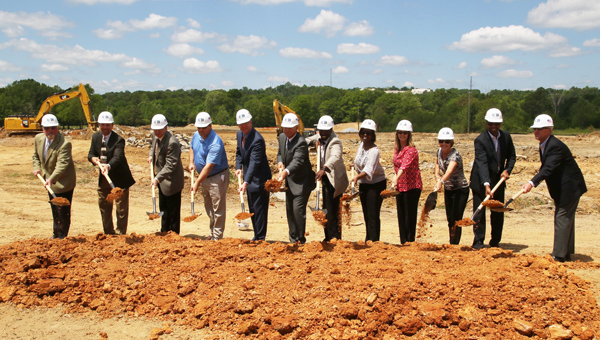 PELHAM— The site of Pelham Park Middle School was busy with activity April 26, and not just with construction workers and heavy machinery. City leaders, school employees, residents and more gathered on the site to officially break ground on the project.

The approximately 120,000-square-foot building will house about 750 sixth- through eighth-grade students. The entire project will cost about $23 million, according to Superintendent Dr. Scott Coefield, and the school is scheduled to open in August 2017.

Coefield said the fine arts instructors helped design an art room, band room and choral area, and the media center will have the flexibility to transform into a large meeting space.

“This is going to be a great school,” Coefield said. “I’m pleased with the design. It is an efficient design that is going to meet our needs. I think our students, staff and parents are going to be extremely excited.”

Robert White, senior project manager with Hoar Program Management, and Robert Gray, with Goodwyn, Mills & Cawood, both spoke about Pelham City Schools as a whole and the progress the school system is making.

White called Pelham a “serious program,” noting it started a few years ago as a vision and has already celebrated the groundbreaking of two new schools.

“That process is providing our children with educational facilities for which our community can be proud,” he said. “As a Pelham resident and parent, I personally am appreciative of that vision and process.”

Studies have shown that the environment students are in can affect their ability to learn, according to Gray. He said designing a school is about community, teachers and the leadership within the system.

“This project in particular is very important to me and our company,” he added. “It’s a middle school, but it’s also a recreation center, a park, it’s a community. When it is completed, I personally think it will change Pelham for the better.”

Pelham Mayor Gary Waters and Board of Education President Rick Rhoades also spoke during the ceremony. They thanked everyone involved with the project who helped to make it possible.

Waters said this school, and all the schools in Pelham, are ingredients in the recipe for a well-rounded community. He also said the schools are a way to keep businesses in Shelby County and attract more to the area.