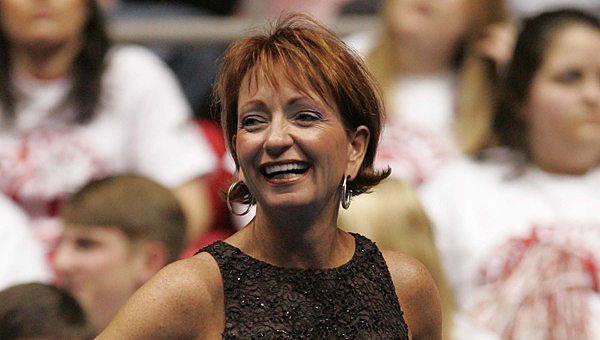 Former University of Alabama gymnastics coach Sarah Patterson will serve as the keynote speaker at Thompson High School’s graduation in late May. (Contributed)

ALABASTER – A former University of Alabama head coach will share her story during Thompson High School’s graduation ceremony in late May, the school announced on April 25.

Sarah Patterson, who served as the University of Alabama’s head gymnastics coach from 1978 through 2014, will deliver the keynote address at the THS commencement ceremony, which will be on Tuesday, May 24, at 6 p.m. at UAB’s Bartow Arena in downtown Birmingham.

Her Alabama teams finished in the top-10 nationally 32 years in a row, including 22 top-three NCAA Championship finishes.

Patterson was inducted into the Alabama Sports Hall of Fame in 2003, where she was the first women’s coach and sixth woman overall to earn entry.

In 2015, she was inducted into the Slippery Rock University Hall of Fame, her collegiate alma mater.

During her tenure at Alabama, Patterson’s teams regularly drew sold-out crowds of more than 15,000 attendees to UA gymnastics meets. Her teams were consistently ranked among the best in the nation both academically and athletically.

Patterson also has a lengthy history of community involvement. Through her “Power of Pink” initiative, she works with Tuscaloosa Toyota and the DCH Foundation to raise money and awareness to combat breast cancer.