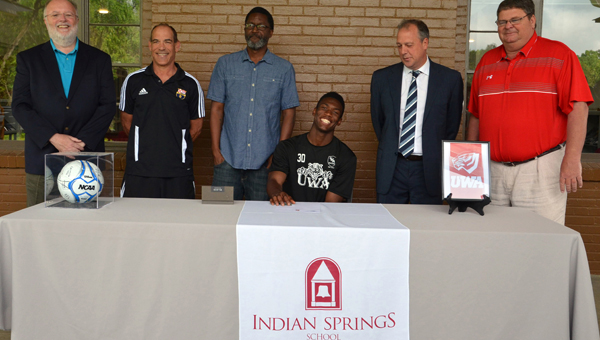 Rakim Ali smiles on April 27 as he signs his national letter of intent to play soccer for the University of West Alabama. (Contributed/Mindy Black)

INDIAN SPRINGS – Rakim Ali, surrounded by friends and family, signed a national letter of intent on April 27 to play soccer for the University of West Alabama.

Ali, who has attended Indian Springs since his ninth grade year, has been playing for Springs since his sophomore year and has been playing competitive soccer since he was seven. Since that time he has played all over the field at different points in his career, a byproduct of his athleticism and ability to adapt quickly to different roles, and admits he has no real position, but has spent this season for Springs mostly playing defensive mid. He has helped lead Springs to their current 19-2-3 record and top overall seed in the 1A-3A classification, and has been a primary reason the Springs defense is giving up just one goal per game this season.

Looking toward the future, Ali said he might play anywhere for the Tigers.

“They’ve said I could play anywhere (on the field), they see that in me” Ali said of his future team. “But I’m probably going to start out playing right back.”

Ali also expressed the location of West Alabama, which is less than two hours away from the Birmingham area, and the competitiveness of the young program as some of the reasons why he eventually decided to take his talents to Livingston.

“They put together a nice package for me,” Ali said. “It’s close, affordable. They’re a pretty young team, they started in 2012. But since then they have been back-to-back conference champions, and they’re getting to the tournament.”

“Rakim is equally adept at dominating a conversation as he is an opponent,” Indian Springs head coach Rik Tozzi said at the announcement ceremony on April 27. “What I’ve learned is his mind and his game share similar characteristics; they’re quick, they’re eclectic, they’re dangerous and often penetrating. This year the Lakers lost their Mamba, and unfortunately we too must pass ours on. UWA is gaining an exceptional athlete and an even better player, but most importantly someone who is going to make their community a richer and more vibrant place just as he has Indian Springs.”

Ali has been credited with four goals and nine assists this year in 19 games from his defensive position, and was also named a member of the Birmingham Metro All-Tournament team. Ali and Springs will play Faith Christian on April 28 in their final regular season game before preparing for a playoff run, with the hopes of capping off his senior year with a second state championship.