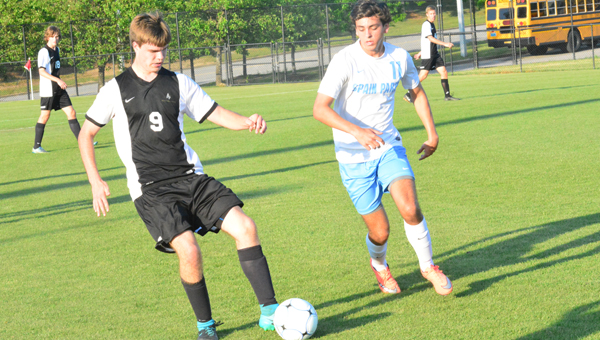 The Westminster School at Oak Mountain’s Alex Poore attempts to fend off Spain Park’s Victor Ibanez during the Jaguars 2-0 win over the Knights on April 26. (Reporter Photo / Baker Ellis)

HOOVER – Before the soccer playoffs start with gusto next week for both the 7A and 1A-3A classifications, Spain Park hosted the Westminster School at Oak Mountain on April 26 for a final tune-up leading into postseason play. Westminster, the defending 1A-3A state champion, has traditionally been one of the stronger small schools in the state, while Spain Park has put together an impressive campaign of their own in 2016. After a tight 80 minutes of soccer, Spain Park escaped with a 2-0 victory.

The game also served as senior night for the Jaguars, and Spain Park paid tribute to its large, 10-member senior class. Robert Frey, Evan Boykin, Eduardo Medina, Luis Garcia, Crew Vlerebome, Victor Ibanez, Parker Sturm, Turner Lamb, Tyler Sumpter and Davis Osborne were all playing in their last home game as high school athletes, and Spain Park head coach Matt Hall spoke to how impressed he has been with the depth and quality of this class and this team in general.

From the jump Spain Park was the aggressor. The Jaguars seemed to gobble up all loose balls and 50/50 balls in the middle of the field throughout the game, and the first 20 minutes of the first half were played predominantly in Westminster’s defensive third. In the 18th minute, Ibanez made an aggressive move past a Knight defender toward the touch line, then played a ball back to Dylan Bradley for a look at goal, but Brodie Winks, Westminster’s keeper, denied the shot, keeping the sheet clean early.

However, just two minutes later Gersain Leon received a pass from the midfield and took a run at goal, shoving an off-balance shot past Winks into the right side of the net, giving Spain Park an early 1-0 lead.

Westminster’s best look of the first half, and the best look of the game for either team, came in the 35th minute. Jack Wilson and Jared Keeler, who did an admirable job in the middle all afternoon for the Knights, combined for a string of beautiful, one-touch passes between a number of Spain Park defenders that ended with Wilson all alone looking at goal, but he pushed his offering wide left by about six inches, and the game remained 1-0 heading into halftime.

After a look from Ibanez in the 48th minute, sophomore Cameron Sumpter placed a shot into the back of the Westminster net in the 51st minute from just beyond the 18-yard box, giving the Jaguars some breathing room and a 2-0 lead.

The Spain Park backline of Boykin, Lamb and Sturm combined to keep Westminster at bay for most of the second half, save for one chance in the 60th minute. Jeremiah Saks laid a great pass from the middle of the field to a sprinting Josh Lipperd, who got a step on Sturm and made a run at goal, a one-v-one chance looming. Lipperd played the ball low and hard, right to where a crouching Frey was waiting, and kept the chance out of the back of the net to preserve his clean sheet.

Ibanez had two more deep looks in the 69th and 72nd minute while Lipperd had the game’s last decent chance at goal in the 75th, but none of those came to fruition, and Spain Park got the senior night win. The win was the seventh clean sheet of the season for Frey and the Jaguars.

“Number one, I just wanted to win the game to be honest with you,” Hall said. “Westminster is a great team, a great program. Every single year we play them it is a close, tight game. I knew this game for senior night was going to be a different-type game, in the sense that it was going to ask a lot of us to play well. I’m glad the guys did play well and we found a way to win it.”

Spain Park moved to 13-9-2 with the win, and will now turn its attention to the first round of the 7A state tournament, where Oak Mountain, the No. 1 team in the state, is waiting for the Jaguars in the first round.

“Going into the Oak Mountain game, they’ve got a great team, we’ve played them twice, we know what they’ve done so far, but we believe that any given night one team can beat another team,” Hall said. “We’re going to prepare well and go over there and we fully expect to play a great game and let the chips fall where they may.”