Man pleads not guilty to fatal shooting at Home Depot on U.S. 280

HOOVER—A 23-year-old murder suspect has pleaded not guilty to the September 2015 fatal shooting of Xavier Montrez Beasley in the parking lot of Home Depot on U.S. 280, according to Shelby County Circuit Court documents. 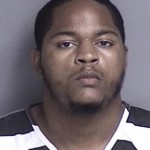 Kareem Dacar Gaymon, of Fultondale, entered pleas of not guilty and not guilty by reason of mental defect or disease to the Class A felony murder charge during an April 26 hearing at the Shelby County courthouse.

According to court documents, Gaymon allegedly shot Beasley as he was leaving work at Home Depot after midnight on Sept. 5.

Gaymon was arrested by U.S. Marshals as he arrived for work at Sam’s Club in Hoover on Oct. 30. He was charged with murder and booked into the Shelby County Jail on Oct. 31.

According to a news release from the Hoover Police Department, Gaymon, an employee of the Home Depot on U.S. 280 at the time of the attack, allegedly left work two hours before Beasley, then returned and waited on Beasley in the parking lot.

Gaymon was indicted for murder by a grand jury on March 8.

Murder is a Class A felony and punishable by up to life in prison upon conviction.

Gaymon is being held in the Shelby County Jail on a $1 million bond.