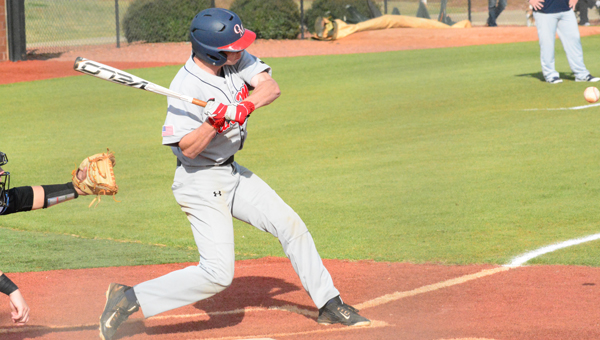 Caleb Floyd and the Oak Mountain Eagles beat Gadsden City twice on April 26, moving to 27-11 for the year. This Oak Mountain team has now won more games than any baseball team in school history. (File)

NORTH SHELBY – After beating Gadsden City twice on April 26, Oak Mountain finished the 2016 regular season with a 27-11 record, the best in the history of the program. The Eagles won 10 of their final 11 regular season games, and finished the season with a 4-2 area record, good for second place in 7A Area 5. The Eagles beat Gadsden City by scores of 6-0 and 13-3, and in the second game of the doubleheader broke the single-season hit record for hits in a season. The previous record was 339, and after 38 games this season Oak Mountain has hit 348, with at least two games left to play.

Oak Mountain used four different pitchers in the first game of the series. Will Driskill, Jake Elkins, Michael Flack and Caleb Floyd each saw time from the mound, as Driskill, Elkins and Flack each pitched two innings before Floyd pitched the final inning, and the four cumulatively held the Titans scoreless.

Oak Mountain scored three runs in the bottom of the second and three more in the bottom of the fourth. In the second inning Floyd, Flack and Elkins led the inning off and all hit doubles, scoring the games first run in the process. Two batters later Trevor Shaw added the Eagles’ fourth double of the inning, giving the Eagles a 3-0 lead in the process. The Eagles added three more in the fourth, holding on easily for the 6-0 win.

The Eagles jumped out to a 5-0 lead after the second inning in the second game of the nights’ doubleheader, and added eight more over the fifth and sixth innings, winning easily 13-3. Scott Fleming and Spencer Hughes combined to pitch a five-hit, three-run effort for the Eagles in a game they never trailed or struggled.

Ethan Holsembeck, Mason Williamson, Gene Hurst and Elkins each had two hits in the second game to lead Oak Mountain from the plate, as the Eagles won and finished the regular season with a 27-11 record.

Oak Mountain will travel to 7A No. 2 Vestavia Hills on April 29 for the Eagles’ opening round playoff series. The Ealges have yet to play the Rebels this season, and this is is the first time Oak Mountain has made the playoffs since 2011.

Rakim Ali smiles on April 27 as he signs his national letter of intent to play soccer for the University... read more