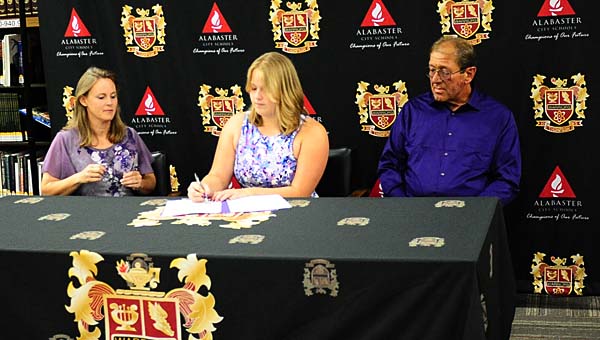 THS senior Sarah Owen, while surrounded by her parents, signs a track and field scholarship with the University of Montevallo during an April 27 ceremony in the school’s library. (Reporter Photo/Neal Wagner)

ALABASTER – A Thompson High School track and field standout will keep her talents close to home after graduating in May, she announced on April 27.

THS senior Sarah Owen, who has set multiple records in the shot put and discus throw during her tenure with the Warriors, inked a scholarship to join the University of Montevallo track and field program during a signing ceremony in the THS library.

While surrounded by dozens of family members, friends and coaches, Owen thanked those who have supported her over the years.

“I thank the support of my community, my coaches both new and old, my club team, my friends and most of all my family for giving me the strength to help me come this far,” Owen said.

For her coaches – both new and old – having Owen attend college close to home is a welcome development.

“She represents this school very well. She is not only a student of the game, but she is the consummate professional,” said former THS track coach Michael Montgomery, who coached Owen for the majority of her high school tenure. “If your spirit is right, God will go along with you and you can accomplish great things. She has grown into a state champion, and there will be many more championships for her to tackle.

“She is complete in her efforts. Young people, if I can leave you with anything today, understand how having the right spirit and being complete in your efforts, where it will take you,” Owen said. “It does not mean that you have to win everything, but it does mean that you will work to win. If you work to win, God will put his hand on you and put you where you need to be.”

Current THS track coach Tim Castille, who worked with Owen during her senior year, said he plans to keep tabs on Owen as she continues her career.

“I just want to say it’s been an honor working with you. She is a professional,” Castille said. “I’m glad you’re staying close to home so we can keep up with you.”

THS Principal Dr. Wesley Hester said Owen excels on and off the field.