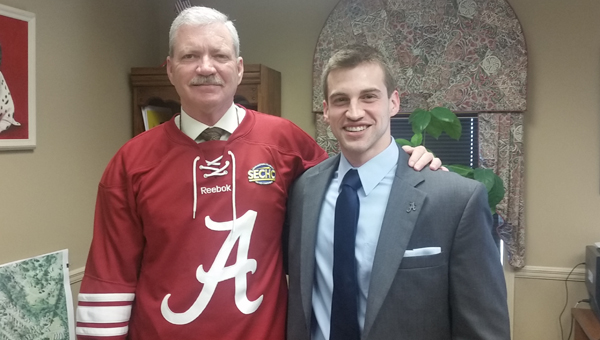 TUSCALOOSA— After the retirement of head hockey coach Mike Quenneville, the University of Alabama hired former player John Bierchen, 27, as the new hockey director for the team.

Bierchen, who was officially hired April 11, played for Alabama Hockey in 2011 and 2012, and he was also the MVP of the 2012 SECHC tournament. He’s coached NCAA DIII games at SUNY Canton and for the Columbus State Cottonmouths in Georgia.

When Quenneville announced his retirement, Bierchen said the university reached out to him and a few other people who they thought could take over the program and continue to make it better.

At first, Bierchen said he wasn’t sure if he wanted to take the opportunity; he was interested in pro hockey. After speaking with some of his mentors, he said he decided taking the coaching position was the best move.

“I think it speaks volumes for what (Alabama’s) program has become when people in pro hockey think it would help my career to take a coaching position with the team,” Bierchen said.

Bierchen said going back to Tuscaloosa is almost like going home. Although he grew up in Clearwater, Fla., he spent a lot of time at the university. He and an older sister, as well as his father, attended the University of Alabama.

“It’s pretty exciting,” Bierchen said. “Getting to go back home to a place I’m familiar with.”

After being named the head coach, Bierchen said everyone asked him what his goal is for the team, and when the team is going to become a member of the NCAA. He said he plans to continue to build the program and do as much as he can for it.

“I’m going to try to make it as close as possible to NCAA D1 and American Hockey League,” Bierchen said. “I’m always saying we are going to try to mirror a D1 or an AHL team with the way we do things on the ice and off the ice in regards to preparation and detail.”

The first game of the season will take place in September, so Alabama Hockey has about four months before the first practice. Bierchen said he will likely hold try-outs the first week of school.

Alabama Hockey’s practices and home games are at the Pelham Civic Center and Ice Arena in Pelham. For more information, visit Alabamahockeyclub.com.