Kingwood football gets back on the field 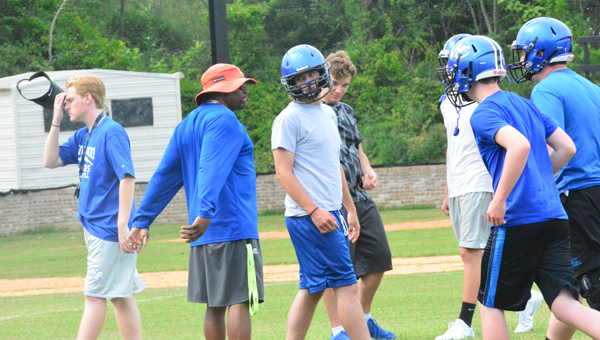 ALABASTER – While playoff baseball and playoff soccer are in full swing currently around the state, taking up much of the sports consciousness, football is lurking in the rearview mirror, getting closer with every passing day. The first marker acknowledging football has made its way back into the sporting discussion comes in the form of spring practice, which began with gusto this week around the state. One team looking to improve from last season’s effort is AISA Kingwood Christian Academy, which began spring practice on April 25.

Last season, in Sheldon Ward’s first year as the Kingwood head coach, the Lions finished 3-7. Kingwood, which was no doubt the victim of a rough schedule with Bessemer Academy, Tuscaloosa Academy and Lee-Scott Academy all on the list, started the season off at 0-5 before finding some traction and finishing the back half of the season 3-2. Unfortunately, moving forward the Lions are going to be even younger than they were last year. Gone are stud linemen Kerry Thompson and Corey Robinson, as well as Chase Inabiett, Wyatt Baker and Mitchell Carter, just to name a few of the 13 seniors who started and contributed significant minutes from that 2015 team.

Looking ahead to the 2016 season however, Ward is optimistic, naming no less than 10 youngsters that will contribute on the varsity team come the fall.

Sophomore Guy Boyd and freshman Tyler Henderson are currently the two main quarterback options working under center this spring according to Ward. Last season both Inabiett and Carter saw time at quarterback, and whether the Lions can find some more stability this year at the position remains to be seen.

Colby Henderson, a rising junior transfer from Coosa Valley, will be tasked with playing receiver and tight end as well as free safety while Charlie Parkinson, a transfer from Chelsea, Antonio Ruiz, Parker Foshee and Dallas Toles are all young, mostly new names who will see time this season as well.

While the team is young, it is also growing. In the season Ward has been at Kingwood the football program has seen a vast jump in numbers, which Ward takes as a sign that the program is moving in the right direction.

“Right now it’s numbers,” Ward said is his main focus. “We have about 35, close to 40 out this spring where last year we had maybe 13. So evidently something is happening from the weight room to the field.”

Over the three weeks the AISA allots for spring practice, Ward is mainly focused on installing his basic, Wing-T offense and helping the offensive and defensive lines to gel together.