Eagles come back, down Vestavia 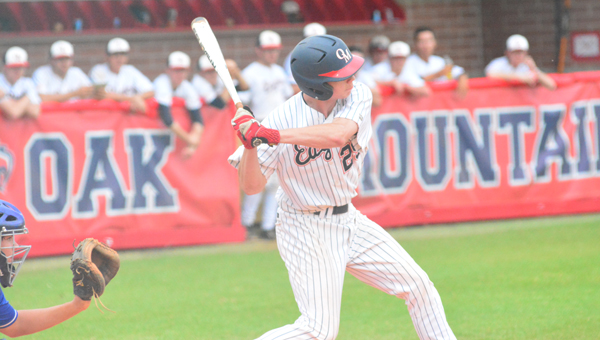 The Oak Mountain baseball Eagles came back from a game down to beat Vestavia in the first round of the 7A playoffs on April 29-30. (File)

VESTAVIA HILLS – The Oak Mountain baseball Eagles aren’t done yet. After making the playoffs this year in Derek Irons’ first season at the helm and for the first time since 2011, the Eagles traveled to play 7A No. 2 Vestavia Hills in opening round of the 7A playoffs on April 29. After losing the first game of the series 4-0, the Eagles came back to win the following game by the same score, forcing a decisive game three on April 30.

After falling behind 4-2 in the third inning of the third game, Oak Mountain came back and scored three runs over the course of the fifth and sixth innings to take a 5-4 lead and held on for the win, knocking off the Rebels and advancing to the second round.

The Rebels scored one run in the first and second inning and added two more runs in the fourth, jumping out to a 4-0 lead, which they held for the remainder of the game. The Eagles only managed four hits in the first game, and never advanced a runner past second base as they fell down a game on the road to Vestavia.

Gene Hurst started the first game for Oak Mountain and threw 78 pitches over four innings, giving up four runs on nine hits before Michael Flack came in to finish the final two innings.

With the season on the line, Oak Mountain responded in a big way, jumping out to a 3-0 lead in the first inning and eventually winning the second game 4-0 to force a third game. Mason Williamson hit a triple in the bottom of the first with the bases loaded, emptying the bases and giving the Eagles a 3-0 lead. In the bottom of the fifth Oak Mountain added another run when Ethan Holsembeck smacked a singl on the fourth pitch of his at-bat, scoring Jake Elkins from third.

Joseph Hartsfield pitched an absolute gem for Oak Mountain, throwing 76 pitches over seven innings work, giving up one single hit and no runs while striking out five batters, making sure the four runs scored by the Eagle offense was more than enough to get the job done. Williamson went 2-for-3 from the plate with three RBIs and a triple while Holsembeck also went 2-for-3 to lead Oak Mountain from the plate.

The Eagles scored two runs in the top of the first inning of the third game, taking an early lead before Vestavia scored four runs over the second and third innings, taking a 4-2 lead. That score held until the fifth inning, when John McDonald hit a two-out solo home run over the left field fence, closing the gap to a single run. In the sixth inning Hurst reached first base on a dropped third strike with no outs, and Caleb Floyd also scored in the ensuing play from second base, bringing Oak Mountain back to even with Vestavia at 4-4. Flack then came to bat and promptly hit a sac fly, moving Hurst to third. Elkins followed Flack at the plate, also hitting a sac fly and scoring Hurst from third and giving Oak Mountain a 5-4 lead, which it held for the rest of the game, winning the series in come-from-behind fashion.

The Eagles used three different pitchers in the third game. Will Driskill started on the mound and lasted 1.1 innings, giving up three runs on three hits. Flack then came in and threw 3.2 innings worth of work, giving up one hit and one run while striking out three and walking four. Hurst then closed the final two innings out, throwing 28 pitches and giving up no hits and no runs to seal the win.

With the win, Oak Mountain now moves on to the second round of the 7A playoffs, where the Eagles will host Hewitt-Trussville on May 6 for a shot at the semifinals.