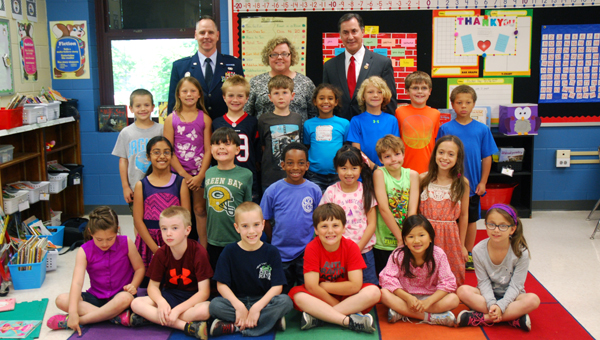 HOOVER—Today’s students are the inventors, engineers, scientists, builders and technology experts of the future. On May 2, Greystone Elementary School second grade teacher Carol McLaughlin was recognized as the Alabama Air Force Association Teacher of the Year for her role in educating tomorrow’s leaders.

McLaughlin builds science, technology, engineering and math into her lessons in fun, interactive and hands-on ways.

“Project-based learning is a part of the day thing (in McLaughlin’s classroom),” Greystone Elementary School Principal Dr. Kathy Wheaton said. “Done right…kids research and it extends what they learn.”

Students in McLaughlin’s class have done a variety of creative, real-life STEM projects, such as “Who’s Afraid of the Big, Bad Wolf?” 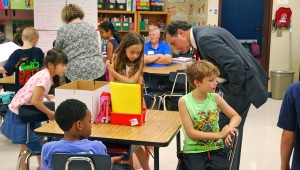 Students were given a list of priced building materials and a budget of $800. As a group, the second graders were tasked with designing and building a model home that could withstand the wind power of a leaf blower. Teams also created real estate flyers and commercials to market their homes to the “three little pigs.”

McLaughlin guided her students and involved experts, such as professional architects, to enrich the learning experience.

Wheaton also noted McLaughlin’s dedication and attention to each student.

“There’s a really good class climate. She lets kids think and grow,” Wheaton said. “To her, its about potential, building and making learners.”

The Air Force Association selected McLaughlin as the Teacher of the Year for her inspired teaching and work with STEM in the classroom.

“The only way we get to stay the best…in the world is by getting you guys excited about science, math, technology and engineering at an early age,” Air Force Lt. Col. Bill Lussier said. “No one did a better job than Ms. McLaughlin here. She took what seems like a simple project and incorporated every one of those aspects into it.”

Lussier and Rep. Gary Palmer, R-Alabama, visited McLaughlin’s classroom con congratulate her and present her with the Air Force Association Teacher of the Year award.