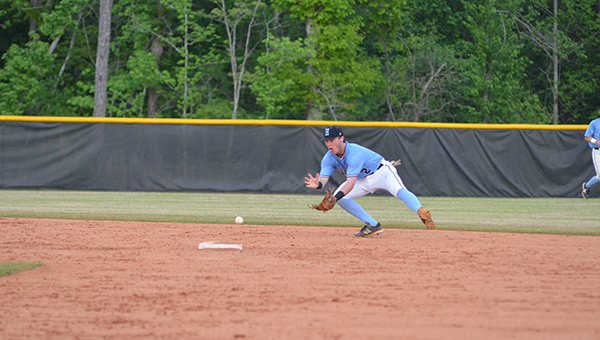 The Helena Huskies baseball team advanced to the third round of the playoffs after defeating Jemison 7-2 and 11-1 the weekend of April 29. (Reporter Photo/Graham Brooks)

HELENA–The Helena Huskies baseball team took on a familiar foe in the second round of the AHSAA 5A baseball playoffs April 29-30, and just like the regular season, the Huskies had no trouble taking care of the Jemison Panthers, winning 7-2 and 11-1 to sweep the series.

Helena finished undefeated in regular season Class 5 Area 7 play that included beating Jemison a number of times, but the best of three game series in the playoffs is what mattered the most the weekend of April 29.

In the opening game of the best of three game series, Helena used timely hitting and solid pitching to jump out to a 1-0 series lead.

The Huskies got on the board first in the bottom of the second inning after Robbie Lively singled to score Nick Ragsdale to go up 1-0.

The following inning saw Helena put a string of hits together before Nash Adams scored Jameson Ling after reaching on a fielder’s choice to extend the lead to 2-0.

Jemison would respond in the top of the fourth inning after Hunter Hood hit a two-run single to score Logan Ray and Phillip Lenoir to tie the game 2-2.

The tie game wouldn’t last for long as Helena put three runs across in the bottom of the fourth inning after a two-run double by Brooks Brophy and an RBI single by Ling to extend Helena’s lead to 5-2.

Helena pitching held Jemison scoreless over the final three innings, and the Huskies tacked on two more runs in the bottom of the sixth inning to win game one 7-2.

Game two of the series was original scheduled for Friday, April 29, after the conclusion of game one, but severe weather entered the area and both teams were forced to play game two on April 30.

The schedule change didn’t seem to affect the Huskies, as Helena scored at least one run in all but two innings.

Helena got on the board first as Sam Praytor blasted a two-run homerun to put the Huskies up 2-0.

Jemison’s lone run of the game came in the bottom of the first inning after Chase Deason doubled to score Logan Ray.

Helena scored three runs each in both the third and sixth innings. In the third inning, Nash Adams singled to center field to score Riley Davis and Kade Jones.

Helena starting pitcher Troy Cordrey earned the win for Helena after pitching a complete game that included no earned runs and five strikeouts.

After sweeping Jemison in round two, Helena will advance to the third round of the playoffs to take on Faith Academy in a best of three game series beginning May 6 at Helena High School.