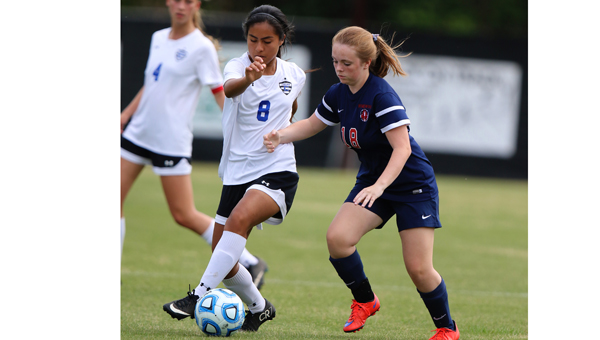 Maria Mendoza and the Chelsea Lady Hornets beat Homewood on April 30 in the opening round of the 6A state playoffs by a 3-2 final. (Contributed / Cari Dean)

CHELSEA – On April 30, the Chelsea Lady Hornets took on Homewood in a first round match-up in the girls’ 6A playoffs. Chelsea came out motivated and focused in the early stages of the game, knocking in an early goal and eventually winning by a 3-2 final to advance and keep its season alive.

Within the first two minutes of the game, Chelsea had a golden opportunity to get on the board but Homewood’s keeper was up to the task with a big save. Moments later, however, freshman Haley Greene broke through the Homewood defense, beating the keeper near-post with a beautiful assist from Maddison Martin, which gave Chelsea an early 1-0 lead.   Despite the efforts of Chelsea’s short passing attack, Homewood kept the game at 1-0 at the half.

Coming out of halftime, Homewood increased the pressure, looking to draw level with Chelsea. Four minutes into the second half Chelsea crossed the ball into the Homewood defensive third, but the initial attempt failed. Sophomore Maria Mendoza then found freshman Claire Guillen at the top of the box, and Guillen buried her shot into the left side netting, pushing Chelsea’s lead to 2-0.

With around 20 minutes remaining, Chelsea countered as freshman Lexie Duca found Greene, who beat her defender and put her shot in the back of the net, extending Chelsea’s lead to 3-0.  Moments later Chelsea commited a foul in the box and Homewood was awarded a penalty kick, converting and cutting the lead to 3-1.

Pushing to get a second goal with less than 10 minutes to play, Homewood’s keeper came off her line, helping in the attack. Chelsea saw the opportunity and countered, but the keeper’s recovery and finger-tip save kept Homewood’s hopes alive.

Around five minutes remained when Homewood’s continued pressure paid off, drawing to within one goal making the score 3-2.  Ultimately, Chelsea hung on and advanced to the second round against top-ranked John Carroll on May 3 with the time yet to be determined.

Eagles come back, down Vestavia