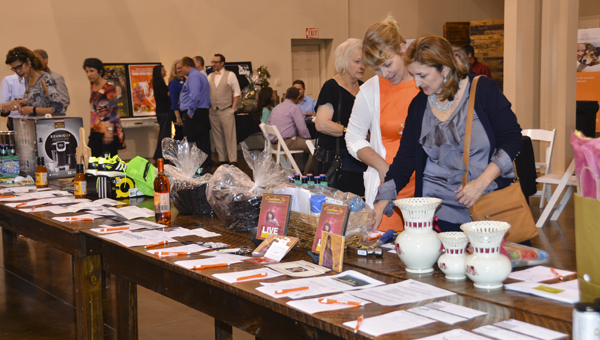 COLUMBIANA – The South Shelby Chamber of Commerce raised more than $5,000 for its scholarship fund at this year’s Boots and Bow Ties silent auction held at Douglas Manor on April 28.

Dozens of people bid on a variety of items donated by area businesses in the auction and enjoyed an evening of networking over heavy hors d’oeuvres and beverages provided by Alabama Crown.

In its current form, the Boots and Bow Ties event is in its second year of existence. All proceeds from the silent auction go toward scholarships for Shelby County students.

This year, the Chamber is able to offer three $1,000 scholarships to graduating seniors from public and private schools in the southern region of county, South Shelby Chamber Executive Director April Stone said.

The 2016 recipients will be announced in May and will be recognized with their families at the Chamber’s June membership luncheon.

The scholarships are not limited to four-year programs, Stone said.