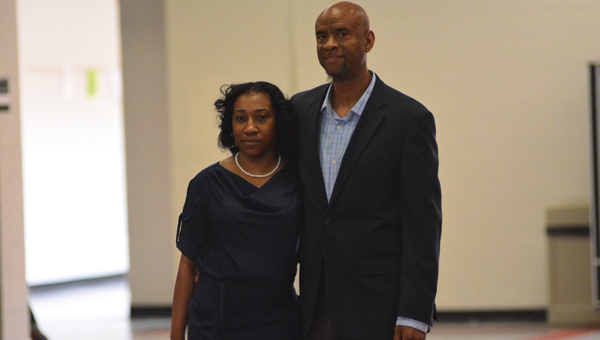 Kelly Cheatham, with his wife Danielle, smiles at Thompson High School on May 2. Cheatham has been named the Warriors’ new basketball coach. (Reporter Photo / Baker Ellis)

ALABASTER – After nearly a month-long search, the Thompson Warriors have found their man to take over the boys basketball program. The head coaching position, which opened on March 31 when Patrick Davis was relieved of his coaching duties, attracted attention from all across the state of Alabama and beyond, according to Thompson High School principal Wesley Hester, and saw numerous highly qualified applicants. After an intensive and comprehensive search, the Alabaster Board of Education approved the hiring of Kelly Cheatham on April 20 to be the new face of the basketball program.

“We are elated to have Coach Cheatham join our professional family here at Thompson High School and the community of Alabaster,” Hester wrote in a statement. “He brings the highest caliber of character and leadership, as well as a tremendous level of basketball knowledge. He has a championship pedigree built on hard work, strong character, service leadership, quality relationships and partnerships and a relentless pursuit of excellence.”

Cheatham comes to Thompson from Ramsay High School in Birmingham, where he has been for the last 15 years. In his time at Ramsay, Cheatham led the Rams to two state titles, four state championship finals appearances and six Final Four appearances. Ramsay has consistently been a mainstay atop the 5A ranks for the last several years, and has been in the 5A Final Four each of the last three seasons under Cheatham’s guidance. The state championship the Rams won in 2006 was the first in the history of the program, and they added their second blue map trophy four years later in 2010.

Cheatham is from the Birmingham area and attended Jackson-Olin High School. He knew he wanted to coach basketball from the time he was a freshman in college at Jacksonville State University, and spent time in college as a volunteer assistant at Ramsay under legendary coach Willie Scoggins, who won an astounding 861 games as a high school basketball coach. He has been around the game and the Birmingham area his entire life and learned from one of the most historic minds in Alabama prep history. His decision to leave the Birmingham metropolitan area and accept this new opportunity in Alabaster was one he felt led towards after speaking with the Thompson leadership about their vision for the athletic program.

“It’s a new challenge,” Cheatham said on May 2. “After talking with Dr. (Wayne) Vickers and Dr. Hester, it sounded like an opportunity that my philosophy and what I believe in would line up with. It was attractive in that way. I had been at Ramsay for the last 15 years, and my wife and I felt like the Lord was leading us in this direction after talking with Dr. Hester and Dr. Vickers about what their vision was for the athletic program here at Thompson.”

Cheatham was named the 2015 ASWA Coach of the Year in the 5A classification as well as Alabama’s head coach in the Alabama-Mississippi All-Star game in 2010, amongst a host of other coaching accomplishments in his 20-year coaching career. He has amassed a career record of 331-167, good for a winning percentage of 66 percent over a sample size of nearly 500 games.

Cheatham said his teams generally like to push tempo, but he tailors his system around the talent he has from year to year. When talking about his expectations and goals for the coming season, he mentioned he wants to focus on taking care of games at home as well as on trying to host the area tournament as a few tangible examples.

“One of the main things we want to do is we want to win our home games,” Cheatham said. “We definitely want to win our home games. If we can steal some on the road we want to do that. You want to hopefully try to host the area tournament, which will give you a little leverage going forward in postseason play. But our ultimate goal is to develop these young men where they can be productive when they leave high school. Whether they go to postsecondary level or the work force, we want them to be productive citizens when they leave.”

Thompson finished the 2015-16 season with a 15-13 record and did not advance out of the area tournament for the second year in a row. With the reclassification looming ahead, Thompson will compete in the new 7A Area 5 along with Hoover, Vestavia Hills and Tuscaloosa County starting in 2016-17.

“Coach Cheatham believes in bringing his best every day in all facets of his work and life,” Hester wrote. “And we will expect the same from his student, and his players and coaches in the basketball program. We look forward to getting started with Coach Cheatham leading the way, and it is certainly a great day to be a Warrior!”