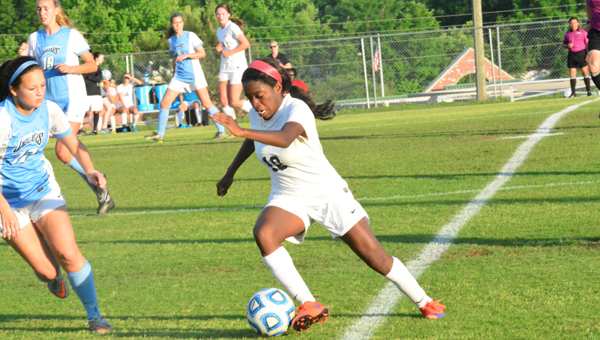 Oak Mountain’s Hailey Whitaker maneuvers around Spain Park’s Lauren Laney during the Lady Eagles 2-1 win in the opening round of the 7A playoffs on May 3. (Reporter Photo / Baker Ellis)

“I thought we played well, I thought we created a lot of chances,” Oak Mountain head coach David DiPiazza said after the game. “We knew they were a good defensive team, knew they defended well. We watched them play and knew their team defense was great and they had a really good goalkeeper. We got in front of goal, had looks at goal, but they were all pressured looks, at angles away from goal with their goalkeeper coming out. So we had chances. I think they played dang hard for 80 minutes.”

Oak Mountain pushed the tempo from the opening whistle, forcing Hailey Johnson, Spain Park’s keeper, to make a few early saves off decent looks from Julia Pack, Hailey Whitaker and Julia Buckner all in the first five minutes. However, it was the Lady Jaguars who struck first blood. Senior midfielder Haley Stone lined up for a corner kick on the near side of the field, and placed a perfect ball from the corner into the back of the Oak Mountain net, giving the Lady Jaguars an early 1-0 lead in the eighth minute of the game.

The goal rejuvenated Spain Park momentarily, and the Lady Jags began to create more chances. But, just five minutes later, Pack headed a goal kick offering from Johnson back toward the Spain Park goal from midfield, where Whitaker was waiting, Whitaker pushed the ball past a lunging Johnson, then flicked a slowly rolling ball backwards into the back of the net, tying the game at 1-1 in the 13th minute.

The rest of the first half mostly went to Oak Mountain, with Pack, Alexandra Dunn and Whitaker all had dangerous looks in the first half, but at the half the two teams were all knotted at 1-1.

The second half was a stalemate for the first 30 minutes. Lucy Thrasher made three long, solo runs down the middle of the field midway through the second half that created positive chances, but the Spain Park back line of Lauren Laney, Hunter Tilashalski, Camile Shepherd and Kayla Wiggins continued to hold steady throughout the majority of the half. Shots from Nealy Martin, Pack, Trinity Prater and Thrasher at various points in the second half were all turned away, and the game remained tied at 1-1 with less than 10 minutes left and time dwindling down.

Martin, who generally plays the sweeper position for Oak Mountain, was moved up to the middle of the field for the first 70 minutes of the game due to her playmaking ability, leaving Buckner to cover the pivotal defensive position Martin usually occupies.

In the final 10 minutes of the game, however, Martin returned to her position in the back line to help ensure Spain Park didn’t get a good look from the likes of Jasmine Green or Brennen Cooke. After a few nice defensive plays, the Lady Eagles were on the attack in the 75th minute. Whitaker took a pass inside midfield and ran on goal, making two Spain Park defenders miss before the senior planted the game-winner in the near corner of the Spain Park net, giving Oak Mountain the 2-1 win.

“We were a little bit off tonight, we probably could have played a little bit better soccer, but the girls worked hard, they’ve worked hard all season,” Spain Park head coach Robert Starr said after the game. “We could have done a better job of possessing the ball.”

Spain Park finished the season with a 15-5-2 record while Oak Mountain moved to 22-3-1. The Lady Eagles will travel to Vestavia Hills on Saturday to take on the Lady Rebels in a rematch of last season’s second round playoff game that Oak Mountain won after 13 rounds of penalty kicks.

44 county athletes to compete at 7A state track…