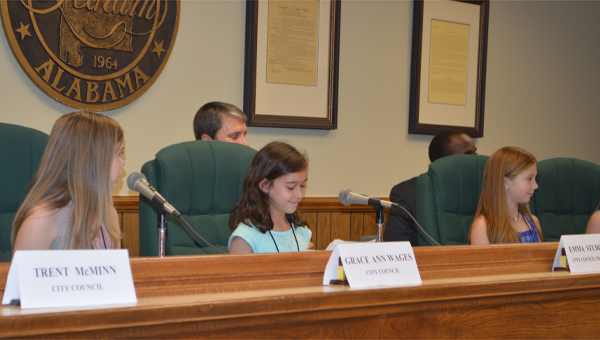 PELHAM— After Pelham’s City Council adjourned from the May 2 meeting, a group of fifth-graders from Valley Intermediate traded places with the city officials in the chambers.

May 2 was Youth Government Day in Pelham, and all the fifth grade students were granted the opportunity to learn about local government by shadowing a department head.

“I would like to say thank you to all the people who have made this happen for us,” said Grace Ann Wages, who performed the role of a City Council member. “It’s been an excellent experience, and I am thankful to all the people that have helped us learn about our local government.” 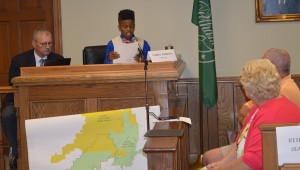 Corey Perkins, who served as mayor for the day, reads a proclamation at the mock City Council meeting.

The day started with Pelham’s morning staff meeting, followed by a conference to discuss what ordinances the class wanted to incorporate into the mock City Council meeting.

After they developed their ordinances, the students toured the police department and spent some one-on-one time learning about a specific branch of the city.

Students shadowed the city employees in every department, such as parks and recreation, Pelham City Schools, IT, finance and more.

Corey Perkins served as mayor for the day, and worked with Mayor Gary Waters to gain a better understand of the day-to-day operations of the city.

“I have learned today as mayor, following Mayor Waters, that he plays an important part in our city of Pelham, Ala.,” Perkins said. “I just wanted to thank him for being my guide.”

During the mock council meeting, Perkins read a proclamation declaring May 2 Youth Government Day after he read his comments for the day.  Then each student took a few minutes to present their findings for the day’s activities.

“I want to thank the city of Pelham for hosting the fifth grade Youth Government Day field trip,” said Josie Allen, who served as city clerk for the day under Marsha Yates. “We got to learn about our city’s government and how it works.”

The ordinances consisted of: Increasing the recycling efforts in Pelham; increasing the number of bike lanes, trails and sidewalks in existing neighborhoods in Pelham, and requiring them to be included in all future neighborhoods; banning smoking in all public building and outdoor areas; and requesting clubs at VIS coordinate projects with the city of Pelham.