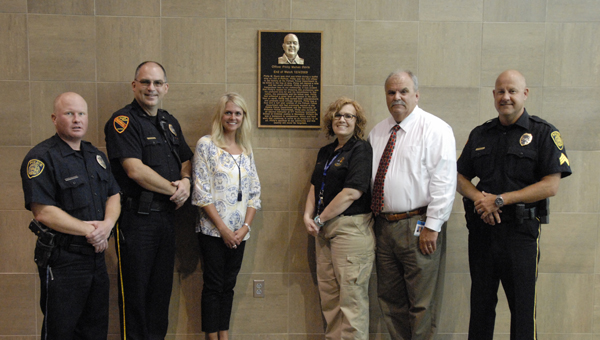 Pelham Police Officers and employees stand with a bronze plaque depicting Officer Philip Davis mounted on the wall of the police department. (File)

PELHAM—In response to several requests for comment on the latest Supreme Court ruling in the murder case of Officer Philip Davis, Pelham Police Chief Larry Palmer issued a statement in a May 3 press release.

After the Supreme Court decision vacated the Alabama Court of Criminal Appeals affirmation of the death sentence, the sentencing portion of the case will come back to Alabama.

This was done in light of a death sentence case out of Florida.

“The men and women of the Pelham Police Department are disappointed in this ruling, but we understand the legal system,” Palmer wrote. “There are constitutional procedures and checks in the legal system, and this is a part of that process to assure that we, as a government, do the right thing.”

A jury of eight men and four women recommended convicted cop killer Bart Wayne Johnson be put to death by lethal injection on May 20, 2011, after finding him guilty of fatally shooting Davis.

The incident occurred on Dec. 3, 2009, when Davis had stopped Johnson on I-65 and was attempting to issue a traffic violation. Johnson pulled a .40-caliber Glock handgun and shot Davis in the face. Johnson fled the scene, leaving Davis to die in the roadway.

The press release said the police department will not make any additional comments at this time, stating it would be “inappropriate for me or any member of this agency to comment on a case that could be sent back to the lower courts for a new sentencing phase in the trial.”

Palmer wrote that the agency does not want to jeopardize a case to make a comment at this time. He said the Pelham Police Department’s goal is that justice be served, and the department, as a whole, is praying for conclusion in case.

“We will ask that everyone please remember the Davis family during this time,” Palmer wrote. “I know my thoughts and prayers will be with this wonderful family.