COLUMBIANA – A 23-year-old Maylene man is facing multiple felony charges after he allegedly distributed Ecstasy and marijuana on two separate occasions in Hoover in late 2015. 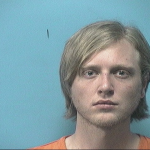 The Shelby County Drug Enforcement Task Force arrested Hunter Sheffield Smith, who lists an address on Abington Circle in Maylene, on April 18 and charged him with two felony counts of unlawful distribution of a controlled substance and misdemeanor counts of second-degree unlawful possession of marijuana and possession of drug paraphernalia.

When he was arrested, Smith allegedly was in possession of marijuana “for personal use,” and a digital scale and mason jars for “weighing and storing a controlled substance,” leading to his two misdemeanor charges.

Unlawful distribution of a controlled substance is a Class B felony, and is punishable by up to 20 years in prison, according to Alabama law.

Smith was released from the Shelby County Jail the day after he was arrested after posting a $32,000 bond.

He is scheduled to appear in Shelby County District Court on May 18.