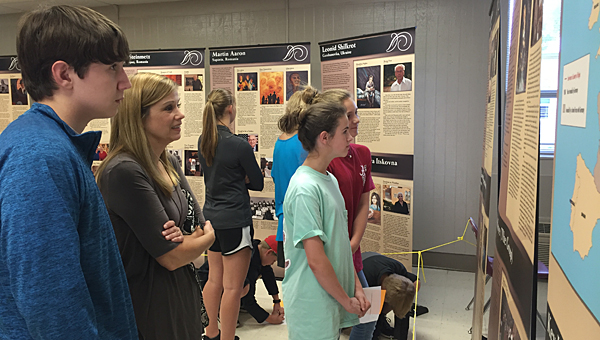 Students and parents view a traveling Holocaust exhibit at Thompson Sixth Grade Center on the night of April 28. (Contributed)

ALABASTER – For Thompson Sixth Grade Center social studies teacher Steve Benton, the history of the Holocaust is one of the most important lessons he teaches each year.

“My generation, we didn’t really do a good job of preventing something like that from happening again,” Benton said during a May 4 interview. “It is my hope that by exposing kids to these lessons, it will prevent racial and hate-related incidents in the future.”

In late April, Benton helped to bring those lessons to life for his students by working with the Birmingham Holocaust Education Center to bring the center’s traveling memorial exhibit to TSGC.

From April 18-29, the center set the exhibit up in one of the TSGC classrooms and allowed every student at the school to view it. The exhibit included several large display boards, photos and information about Holocaust survivors who later made their homes in Alabama.

On the night of April 28, the school opened the exhibit to the community, drawing more than 100 visitors.

Benton said he has been studying the Holocaust in his personal life for many years, and is seeking to share what he has learned with his students.

He recently learned he was one of two teachers from Alabama who received a scholarship to attend a Holocaust education convention hosted by the Jewish Foundation for the Righteous at Columbia University this summer.

There, Benton will participate in intensive educational sessions and hear from Holocaust survivors, he said.

“It opens the door for many more opportunities down the road,” Benton said. “It’s something I’m really looking forward to.”

“He is doing things that transfer his experiences to enhance students’ understanding of what the Holocaust was. It’s making him a better teacher,” Steele said. “One of the most important lessons we can instill in kids is empathy.”