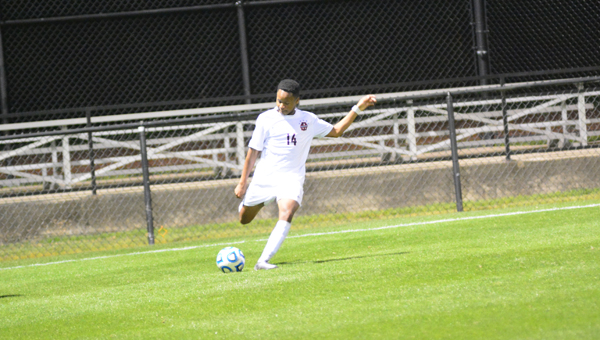 Oak Mountain’s Kennedy Davis is one of the 11 players from Shelby County that will take part in the North-South soccer All-Star games on July 19 in Montgomery. (File)

MONTGOMERY – The squads for the 2016 North-South boys and girls soccer All-Star matches have been selected, and were released by the AHSAA on May 4. All selected players are rising seniors in the 2017 graduating class, and were selected by the Soccer Selection Committee from nominations submitted by high school coaches from across the state. Shelby County, which is known for having some of the most competitive soccer programs in Alabama, is sending 11 athletes to compete in the games, six girls and five boys, along with two coaches.

The six girls who will compete on the team will all be playing on the North’s 17-person roster, meaning roughly 36 percent of the entire North roster will come directly from Shelby County. The six players are Brennen Cooke, a forward from Spain Park, Meghan Cottingham, a forward from Thompson, Josephine Gray, a midfielder from Indian Springs, Madeline Guillen, a forward from Chelsea, Camryn Neal, a forward from the Westminster School at Oak Mountain and Alyssa Vess, a goalkeeper from Oak Mountain. As of May 5, Gray and Vess were the only two players from this bunch still in the hunt for a 2016 state title. Hunter Gray, the head coach of Indian Springs, has also been selected as one of the two coaches for the team along with Julie Little from Albertville.

All five of the boys competing in the All-Star game will also all be competing on the North roster, and will make up roughly 28 percent of that roster. Those five players are Liam Condone, a midfielder from Spain Park, Kennedy Davis, a forward from Oak Mountain, Landon Gaskins, a midfielder from Helena, Seth Torman, a goalkeeper from Pelham and Jack Wilson, a midfielder from the Westminster School at Oak Mountain. As of May 5, Davis, Torman, Gaskins and Wilson’s respective teams are all still alive in the 2016 state playoffs. Daniel DeMasters, the head coach of the currently undefeated and defending 7A state champion Oak Mountain Eagles, has also been selected as one of the two coaches for the North as well, along with Casey Harbin of Cullman.

The games will take place at the Emory Folmar Soccer Complex in Montgomery on Tuesday, July 19. The girls will kick off at 5 p.m., followed by the boys at 7. The North swept both matches in 2015 and currently holds a 10-4-1 edge on the boys’ side of competition and a 12-2-1 advantage in the girls’ game.