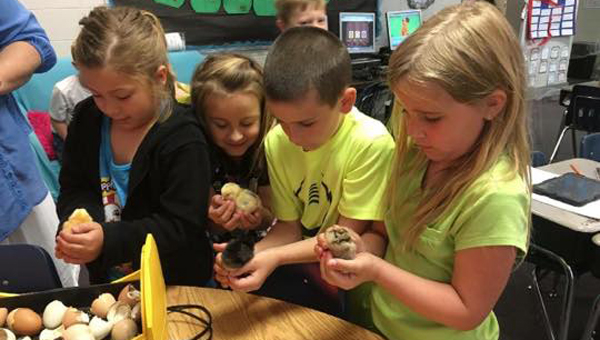 SHELBY— When Amy Nelson and her first grade students walked into their classroom April 25, they were surprised to find some new arrivals. All of the eggs the class had been taking care of hatched and were replaced by fuzzy-feathered chicks.

It all started when the grandmother of one of Nelson’s students offered to let Nelson borrow her incubator.

“Of course, I couldn’t pass that up, and I had some lessons and things to go along with hatching chicks and activities we could do,” Nelson said in a May 4 interview. “I just never had the opportunity because incubators are hard to come by and are really expensive.”

Each of the students kept a chick journal where they noted the progress of the chick and egg every day for the 21-day life cycle. Nelson said the class discussed the basic needs of life and the differenced between an incubator and being hatched by a hen.

With the lights off, the students could hold a candle up to the egg to see the chick inside. Nelson said the students took notes on which chicks seemed to move around more than others.

The activities quickly became the students’ favorite part of the day.

“That was the first thing they wanted to do every day when they came into the classroom, so they were super excited about it,” Nelson said. “I don’t know who loved it more: If I did or the kids did.”

Nelson said they planned on watching the chicks hatch during the week, but when they arrived at school April 25, all the chicks had already hatched.

“They were so excited. I don’t even think they went to the closet to unpack their backpacks,” Nelson said. “They ran to the little incubator and were all crowded around it.”

The room was filled with guesses of which chick came from which egg, and Nelson said they hosted a birthday party to celebrate the arrival of the chicks.

The class enjoyed birthday cake and a rendition of “The Chicken Dance,” and Nelson granted each student a certificate declaring them an “Eggspert on chickens.”

Because of the success of the project, Nelson said she plans on applying for grants so she can purchase an incubator for the school. She said she would like to make the chicks an annual lesson for her students.

“I think you are more excited about things you can see happen,” Nelson said. “I mean, you can read it in a book, you can talk about it all day long, but when you can see it happening before your very eyes that’s something you are never going to forget.”