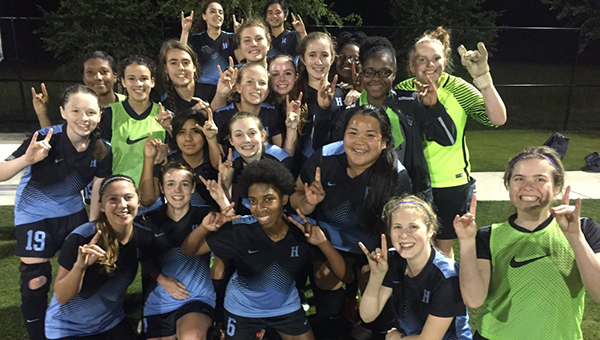 The Helena Lady Huskies soccer team celebrates after defeating Calera 4-2 in the second round of the playoffs. (Contributed)

CALERA–The Helena Lady Huskies soccer team traveled to Calera on Tuesday, May 3 to take on the Lady Eagles in the second round of the AHSAA 4A-5A playoffs and completed the upset winning 4-2.

The Lady Huskies used four goals, two in the first half and two in the second half to take down Calera to move further in the playoffs.

Helena has found some magic in the post season as the Lady Huskies finished the regular season with a 5-16-1 record, but currently are in the midst of a three-game win streak including the upset win over Calera.

Helena found themselves down 1-0 early in the game but came back late in the first half to take a 2-1 lead heading into half time after goals from Juli Tatum and Roby Boatman.

The Lady Eagles would respond in the second half to tie the game 2-2 but Tatum scored two penalty kicks to put Helena up for good 4-2.

Tatum led Helena with three goals in the game as the Lady Huskies broke through to beat Calera for the first time this season. Helena had lost the two previous games to Calera in the regular season.

With the win, Helena advanced to the third round of the playoffs to take on Marbury on Saturday, May 7 at Helena High School.

Helena routs Carver 10-0 in second round of playoffs