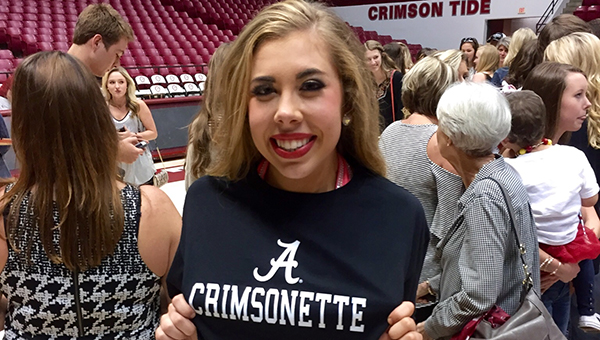 Helena senior Abbey Manasco was selected to join the University of Alabama Crimsonettes team in the fall. (Contributed)

HELENA–Helena High School senior and current captain of the HHS Majorette Squad Abbey Manasco will join 28 others in the fall as the newest members of the University of Alabama Million Dollar Band Crimsonettes team.

Manasco was selected as the newest member among 47 others who tried out for the team on Saturday, April 30 and was excited to make the squad after looking up to them for many years while growing up.

“When I made the team I was so excited because I’ve been going to the games since I was a little girl and I’ve always looked up to the Crimsonettes,” said Manasco. The Crimsonettes are a really prestigious group and I can’t wait to actually be a part of the team and travel to all the games with the football team.”

The one-day tryout consisted of a series of cuts and group and individual routines before the newest team members were selected.

Manasco spent her first two years of high school at Pelham High School before moving to Helena High School for her final two years once the school was built.

Manasco was the co-captain of the HHS Majorette Line her junior year and became captain her senior year and she believes the transition from Pelham to Helena really helped her grow and was one factor of why she made the Crimsonettes.

“I think the transition helped me when I left Pelham and a lot of my friends to go to Helena,” said Manasco. “I think that experience will help me when I leave Helena to go to Alabama because Alabama is a huge school.”

Manasco is also excited to become part of the Iron Bowl rivalry with one of her good friends and HHS teammate Sydney Edmundson.

Edmundson is currently the co-captain for the HHS majorette squad and was selected as a member of the Auburn University Majorette Line a month earlier.

Manasco said her and the other 28 members will report to a mini camp in June and band camp will begin in August.

Alabama will kickoff the 2016 football season against Southern California in the Advocare Classic in Arlington, Texas on Sept. 3.