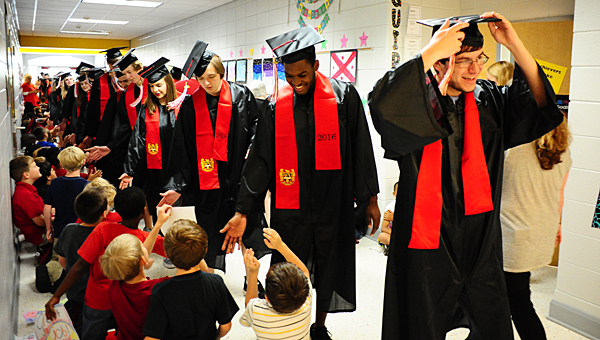 Thompson High School seniors don their caps and gowns as they greet students at Meadow View Elementary School during the parade of graduates event on May 6. (Reporter Photo/Neal Wagner)

Having served as a teacher at the school before moving to the library, Killingsworth remembered the first students she taught at CVES. On May 6, those same students were celebrating one of their last major events as students at THS.

“I just can’t believe it’s already here. It goes by so fast,” Killingsworth said as she wiped away tears.

May 6 brought a mixture of emotions – ranging from cheers and laughter to tears of joy – for the students, teachers and administrators in the Alabaster City School System as it held its first parade of graduates.

Throughout the day, the class of 2016 donned their graduation attire and visited each school in the city through Thompson Middle School as their fellow students cheered, waved congratulatory signs and offered plenty of high-fives.

As the nine buses transporting the hundreds of high school seniors arrived at each school, they received a hero’s welcome. 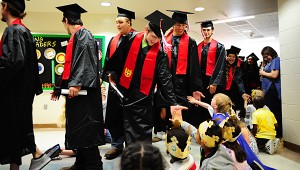 “It was an idea that started at the high school, and I think it’s just a great incentive for all of our students to see what they’re working toward,” said ACS Superintendent Dr. Wayne Vickers. “I think it also gives our seniors a chance to reconnect with where they started, which is just a great story. I think it will be a very emotional day for our teachers and our students.”

In addition to highlighting the graduates, the day also served to give the city’s younger students a glimpse into the future, Hester said.

“We saw on social media that other schools had tried this. Mrs. Vickers saw it and we took a look at it and decided ‘Let’s do this.’” Hester said. “What a great way to bring our schools together and our community together. It’s great for our seniors, it’s great for our graduates, but it’s also an inspiration for all the other kids in our system.”

As she prepared to board one of the buses transporting the graduates from Creek View Elementary to Meadow View Elementary, Pam Vickers said the work to organize the day was well worth it.

“It was the hard work of a lot of people, and it’s been a very good success,” she said. “It took us about a month to work out the logistics, but all of our schools worked together collaboratively, and today we are all one.”