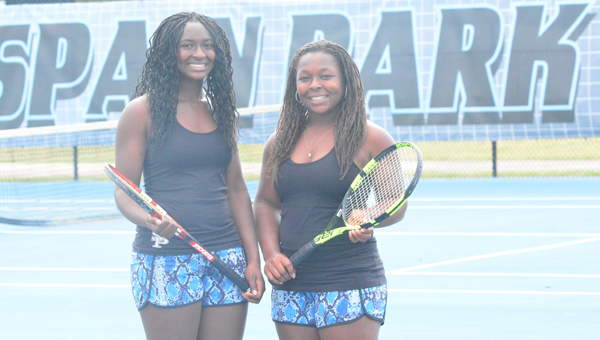 Winning a state title is the dream of every high school student-athlete. At the start of every season, no matter the sport, every team and every athlete across the country believes, on some level, that a state championship is in the stars. But for the overwhelming majority, a state title is just that, a dream. What makes them so coveted is in part their elusiveness. And for those few athletes who do climb the ranks and end their seasons at the top of their respective sports, rarer still is that accomplishment realized with a sibling by their side. 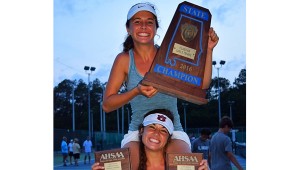 Sisters Frannie Ware (bottom) and Callie Ware smile and show off their hardware after winning the 6A No. 4 and No. 2 court singles titles, respectively, on April 29. (Contributed)

This was however the reality this tennis season for two pairs of sisters across the county. Daryn and Sydney Ellison of Spain Park won the 7A No. 1 court doubles state title in Decatur on April 26, while Callie and Frannie Ware of Briarwood both won singles’ state titles in the 6A state tournament on April 29 en route to a team state championship for the Lady Lions.

Daryn, a rising senior, and Sydney, a rising freshman, have both been playing tennis since they were 4 years old. By contrast Callie, a graduating senior, and Frannie, a rising sophomore, both started playing tennis at the same time in 2009. Sydney and Frannie, the two younger sisters of their respective pairings, both won individual state titles last year as middle schoolers, while the two older sisters were seeking their first state championships coming into this year.

The Ellison sisters beat Haley Harmon and Hannah Nelson of Vestavia in the No. 1 doubles finals by a score of 6-2, 4-6, 6-3 to claim their state title. After losing to both Mountain Brook and Vestavia in the regular season, Daryn and Sidney had to beat both the Lady Rebels and the Lady Spartans in sectionals and at the state meet to earn the distinction of state champions. The regular season losses did not affect the sisters’ outlook going into sectionals or state, as both knew they were capable of winning those matches.

“Those matches were close,” Daryn said of the regular season run-ins with Mountain Brook and Vestavia. “We knew we could definitely win, it was just a matter of doing what we had to do.”

“We had a game plan, because it was working in the first matches,” Sydney said. “So we just kept doing what we were already doing, what was working, and just tried to stick with it the entire match, and it worked.”

Both Ellison sisters are student of the game as well. They have been playing around and next to each other long enough and at a high enough level to understand and appreciate the skillset of the other. Whether Daryn talks about Sidney’s game or vice-versa, the two are quick to complement the other.

“She’s a good baseliner, she usually rallies it out and I can put away the last ball,” Daryn said of her younger sister. “We just work well together.”

“She’s really solid,” Sydney added of her older sister. “Her game doesn’t fall off. She’s a rock, she’ll always be there to pull it out when I need her.”

The Ware sisters, on the other hand, only ever played doubles together once this season, in a match against Spain Park. Callie’s usual doubles partner, Katelyn Bussey, was sick, and Frannie stepped in for the day. The two left-handed sisters won that match, and can say went undefeated as a doubles team without technically lying.

While both Callie and Frannie have dabbled and play in the doubles’ tennis realm (Callie and Bussey were knocked out in the second round of the No. 2 court doubles tournament by eventual champions Beverly Fite and Anna Katherine Layton of Decatur), both have found more success as singles players. A year ago, Callie won the No. 6 court singles title as an eighth-grader, and this year made the jump all the way up to the No. 2 court as a freshman. The leap in quality of competition was daunting for the freshman, and she wasn’t sure how she would fare at the state tournament.

Frannie, who was playing in her final state tournament as a Briarwood student, finally broke through to claim her first state championship on Court No. 4 over Mary Ann Wolfe from Walker. Frannie’s win also went a long way to securing the team state championship for the Lady Lions, as Briarwood beat Walker in the overall team standings, 58-50.

“It was really awesome,” Frannie said of that day. “I was playing kind of parallel with Callie, our matches were going on at the same time. I could hear people cheering over where she was and I heard Callie had won her match. I was so excited and was just thinking ‘My little sister just won state!’ I won my match a few minutes later. It was one of the most exciting and memorable days of my life so far.”

Callie and Frannie both won their matches in straight sets, with Callie beating Emily Overbee of Decatur 6-4, 6-2 and Frannie beating Wolfe 6-2, 6-3.

Daryn and Sydney will both be back for another season next year and have to be considered one of the early frontrunners to win the 2017 7A No. 1 court doubles title yet again, while the Ware sisters will part ways in the fall. Frannie is off to Samford University, where she said the most competitive tennis she will be playing is on the intramural courts. Callie on the other hand will be back at Briarwood for her sophomore season and will try for her third-consecutive singles title.