Three from Kingwood to play in college 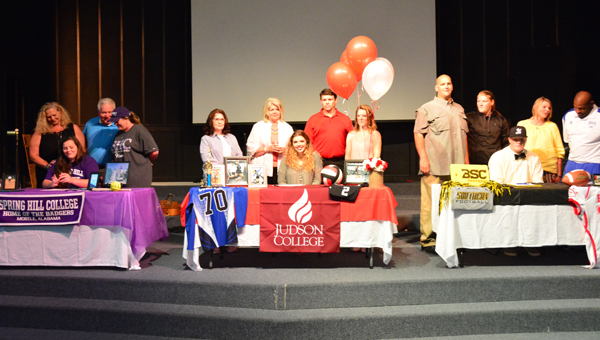 From left, Courtney Kendrick, Hannah Lumpkin and Corey Robinson pose on stage at Kingwood Christian School on April 5 as all three committed to furthering their athletic careers at the collegiate level. (Reporter Photo / Baker Ellis)

“We are blessed to have three (members) of our student body that are signing and going on to the next level,” Kingwood athletic director Eddie Toles said at the ceremony. “That’s a great thing and I’m really proud of them. All three of these athletes really stepped up and helped our programs. Parents are proud of them, coaches are proud of them, and the colleges you are going to are lucky to have you.”

Robinson, who was named a Second-Team All-County selection after his senior year, had drawn a preferred walk-on slot from Jim Harbaugh and the University of Michigan and also held an offer from West Alabama, but after his visit to Birmingham-Southern in January he made up his mind that was where he wanted to play his college ball.

“It was just really close to home, so all of my family and friends can still come out and see me, which was a really big deal,” Robinson said of his decision to attend Birmingham Southern.

Kendrick, who signed with Division II Spring Hill to play first base on the softball team, said the scholarship opportunity she received from Spring Hill was too good to pass up.

“I got a really good scholarship,” Kendrick said. “They said I could start on JV and will move up to varsity depending on how I do.”

Lumpkin will attend Judson, an all-girls school in Marion, where she will join the volleyball team as an outside hitter. She mentioned the majors that Judson offers as one of the main reasons she decided to attend the school.

“It was mostly the money, and their majors are great,” Lumpkin said, who is interested in pursuing a career in equine studies.

All three will join their respective teams this summer before classes start in the fall.