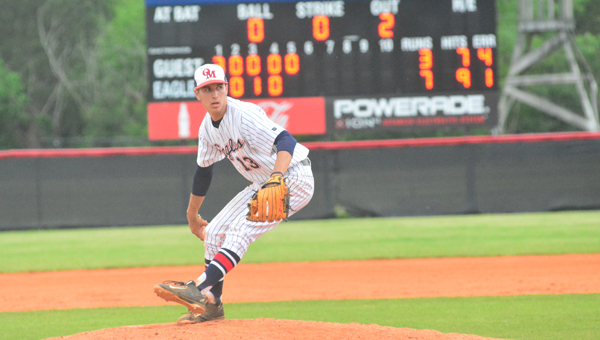 Joseph Hartsfield threw a complete game shutout in the Eagles’ second game against Hewitt-Trussville on May 6 in the second round of the 7A playoffs. Despite Hartsfield’s effort, Oak Mountain lost the series two games to one. (File)

NORTH SHELBY – A week after coming back from down a game to Vestavia Hills on the road in the first round of the 7A baseball playoffs, Oak Mountain could not pull off the same feat at home in the second round against Hewitt-Trussville. The Eagles, which were making their first postseason appearance since 2011, lost the opening game of the second round to the visiting Huskies 6-5, but won the second game on May 6 to force a decisive game three on May 7. After a tight, hard-fought, nine-inning third game, Oak Mountain fell 7-5, which ended one of the most stellar baseball seasons in the history of the school.

The Eagles struck first in the opening game in the bottom of the first inning when McDonald hit a one-out single to right field, which scored Ethan Holesmbeck from second base. Hewitt then scored two runs in the top of the second and added another in the top of the third, but Oak Mountain responded with two runs of its own in the bottom of the third, courtesy of Joseph Hartsfield and McDonald, to tie the game at three heading into the fourth inning.

Hewitt momentarily took the lead in the top of the fourth, plating one run, before the Eagles added two more in the bottom of the inning when Jake Elkins scored from second via a Holsembeck triple, and Holsembeck scored soon after thanks to a Hartsfield double, which gave Oak Mountain the lead again at 5-4 heading into the fifth inning. However, with two outs in the top of the sixth, Hewitt’s Ed Johnson hit a double to right field, scoring Dylan Cook and Tyler Tolbert. Oak Mountain could not muster any more offense over the final two innings, and fell 6-5 in the opening game.

Gene Hurst threw a complete, seven-inning game for Oak Mountain to start the series. Hurst threw 123 pitches, struck out 11 and gave up six runs on 12 hits. Holsembeck and McDonald both had two hits in the opening game to lead Oak Mountain from the plate.

With the season on the brink, Oak Mountain responded in almost the exact same fashion as it had a week ago in game two versus Vestavia. The Eagles scored three first-inning runs to take an immediate 3-0 lead, and never gave the Huskies room to breathe, winning easily by a final of 6-0.

The easy win came in large part thanks to Hartsfield’s performance on the mound. Hartsfield needed just 84 pitches to get through seven innings, and allowed only two hits while striking out 12 batters and giving up just one walk. The 6-0 win forced Oak Mountain’s second game three in as many weeks, which took place on May 7.

In the third game of the series, Oak Mountain carried a 4-3 lead into the top of the seventh inning, before Tolbert scored from second on an error to tie the game at 4-4. After Oak Mountain failed to score in the bottom of the seventh, the game headed to extras, with a trip to the 7A Final Four on the line. After a scoreless eighth inning, the Huskies plated three runs in the top of the ninth to take a 7-4 lead. The Eagles got a run back in the bottom of the ninth when, with the bases loaded and only one man out, Hurst got walked on four pitches, scoring Hartsfield from third. However, Nick Feenker struck out on three pitches, and Elkins grounded out to third base on the first pitch of his at bat, ending the game.

The Eagles ended the year with a 30-14 record, the most wins in a season in school history.

Abby Jones and the Oak Mountain Lady Eagles won the 7A Area 5 tournament on April 7 and are headed... read more