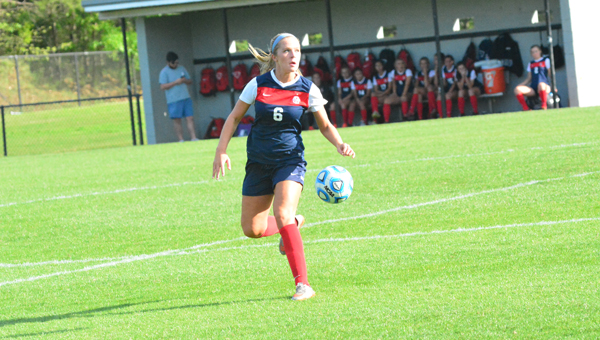 Gracie Miller and the Oak Mountain Lady Eagles fell to Vestavia Hills 3-2 on May 7. (File)

VESTAVIA HILLS – For the first time since 2011, the Oak Mountain Lady Eagles will not be going to Huntsville. After the Lady Eagles came back from an early deficit to beat cross-city rival Spain Park 2-1 in the opening round of the 7A playoffs on May 3, Oak Mountain traveled to take on arch-rival and biggest threat Vestavia Hills in the second round of the postseason on May 7. Oak Mountain and Vestavia have traded places as the No. 1 team in the state all season, and coming into the elimination game the Lady Eagles held the moniker of top team in the state after knocking off the Lady Rebels in the Metro Tournament final in overtime on April 22.

The playoff game was a rematch of last year’s second-round playoff game, which Oak Mountain won after an excruciating 13 rounds of penalty kicks. Over the last few years virtually nothing has separated these two teams in terms of ability, and they have been operating largely on a level separate from everyone else in the state.

However, this year it was Vestavia that got the one that mattered most. The Lady Rebels took a quick 2-0 lead over Oak Mountain in the first half, and after Oak Mountain pulled even in the second half at 2-2, Vestavia added a late third goal with less than 10 minutes to play in the game, taking a 3-2 lead and eventually winning by that margin.

After a tight first 10 minutes of play in the second, Dunn evened things up with a neat goal in the 49th minute, bringing the Lady Eagles completely out of the hole they dug for themselves in the first half. After a number of impressive saves from Alyssa Vess and numerous looks for Oak Mountain, Vestavia scored in the 73rd minute, taking a 3-2 lead, eventually winning by that margin.

Oak Mountain finished the season 22-4-1, marking the fifth year in row that the Lady Eagles have won at least 22 games.