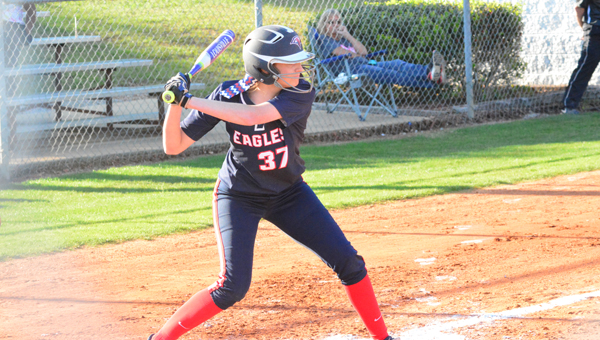 Abby Jones and the Oak Mountain Lady Eagles won the 7A Area 5 tournament on April 7 and are headed to the North-Central Regional tournament. (File)

HOOVER – After finishing tied for first at the top of 7A Area 5 in the regular season with Hoover, the Oak Mountain Lady Eagles made an emphatic case as the best team in the area during the area tournament from May 6-7. The Lady Eagles, ranked second heading into the tournament thanks to a lost coin flip with Hoover, beat Tuscaloosa County in the first round of the tournament and Hoover in the second round to clinch a berth to the North-Central Regional tournament. After Hoover beat Tuscaloosa County in the elimination bracket, the Lady Eagles had to beat the Lady Bucs just once in two tries to claim the area title. Oak Mountain lost to Hoover in the first championship game 12-11, but then throttled the Lady Bucs in the second game 23-3 to claim the top seed out of the area.

In the opening game of the tournament the Lady Eagles trailed Tuscaloosa County 5-4 entering the bottom of the sixth inning, but scored three runs in the bottom of the sixth to take a 7-5 lead. Tuscaloosa County added a run back in the top of the seventh, but couldn’t pull even as the Lady Eagles won game one. Abby Jones threw a complete game for Oak Mountain, hurling 124 pitches over seven innings, giving up six runs on nine hits ad striking out one.

In the first of what turned out to be three meetings between Oak Mountain and Hoover in the span of three days, the Lady Eagles got the best of Hoover by an 11-4 score. Oak Mountain took a 7-1 lead into the third inning and never looked back, connecting on 14 hits in the game as well as three home runs. O’Neil Roberson went a perfect 4-for-4 from the plate with four RBIs and a pair of home runs to lead the Lady Eagles, while Cassady Greenwood went 2-for-4 with a home run and two RBIs as well to lead Oak Mountain from the plate. Clara Fuller pitched a complete, seven-inning game, giving up four runs on seven hits while striking out seven in the win, which clinched a regional tournament berth.

After Hoover beat Tuscaloosa County in the elimination bracket, Oak Mountain needed just one win over Hoover in the double-elimination setting to clinch the area title. However, the Lady Bucs made Oak Mountain wait for its title, as Hoover won the first game on May 7 by a 12-11 final. Hoover took a 12-2 lead into the bottom of the seventh inning and looked to be in complete command of the game, but the Lady Eagles roared back in the bottom of the seventh, scoring nine runs, but came up one run short of forcing extra innings, losing 12-11.

In the winner-take-all final game of the tournament, Oak Mountain wasted no time asserting its dominance. The Lady Eagles scored 11 runs in the first and second innings, taking a whopping 22-3 lead over Hoover entering the third inning, winning easily by a final of 23-3. In the final game of the area tournament, Roberson went 4-for-4 from the plate with two home runs, one of which was a grand slam, for a total of seven RBIs. Ashlee Sanders went 3-for-3 with two RBIs, Carmyn Greenwood went 3-for-4 with six RBIs and a homer, M’Kiyah Mitchell went 3-for-3 with three RBIs and a home run and Maddie Katona went 3-for-3 with two RBIs as well as Oak Mountain accumulated a whopping 23 hits over just three innings.

The Lady Eagles will play Vestavia Hills, the 7A Area 6 runner up, in the opening round of the North-Central regional, which will begin on May 12.

Gracie Miller and the Oak Mountain Lady Eagles fell to Vestavia Hills 3-2 on May 7. (File) By BAKER ELLIS... read more