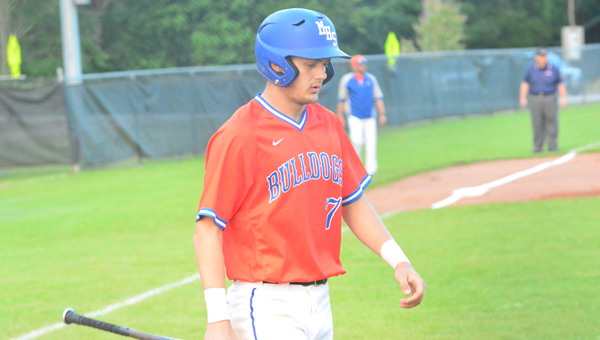 Zac Oden and the Montevallo Bulldogs fell to UMS-Wright in the 4A quarterfinals on May 6 in two games, ending their season. (File)

MOBILE – After winning the 4A Area 7 championship, beating Childersburg in the first round of the 4A playoffs in two games and beating Oak Grove in the second round in three games, the Montevallo Bulldogs traveled to take on 4A No. 1 UMS-Wright Bulldogs in the 4A quarterfinals on May 6, with a berth in the 4A Final Four on the line. After a tightly contested first game that saw UMS-Wright win 7-3, the Bulldogs from Mobile pulled away in the second game to beat the Bulldogs from Montevallo 12-0, ending Montevallo’s impressive season.

After a scoreless first inning, UMS-Wright began to slowly put distance between themselves and Montevallo over the course of the rest of the game, scoring at least one run in each of the following innings. One run in the second and third innings along with two runs in the fourth and fifth gave UMS-Wright a 6-0 advantage with two innings left to play. Montevallo did get three runs back in the top of the sixth when Levi Layton scored on an error and Justin Pickett hit a single to left field, scoring Hunter Nabors and Jonathan Pintore. That was as close as Montevallo got to UMS-Wright in the game, however, as the home team held off the visiting Bulldogs, winning 7-3.

Zack Thompson took the mound in the opening game of the series for Montevallo and pitched a complete, six-inning game. Thompson threw 92 pitches over six innings, giving up seven runs on 12 hits while striking out one. Nabors led the way for Montevallo from the plate, finishing the game 2-for-3.

Jaret Yancey started the game for Montevallo from the mound, but only lasted one inning, throwing 45 pitches, giving up six runs on six hits while striking out one. Pintore came in in relief and finished the final four innings, throwing 87 pitches while giving up six runs on four hits while striking out four. Zac Oden, Pintore, Pickett and Thompson each had a hit in the game to lead Montevallo from the plate.

Montevallo finished the season with an appearance in the 4A quarterfinals, and also won the 4A Area 7 title.

After beating Briarwood 1-0 on May 3 and Southside-Gadsden 2-1 on May 7, the Pelham Panthers are returning to the... read more