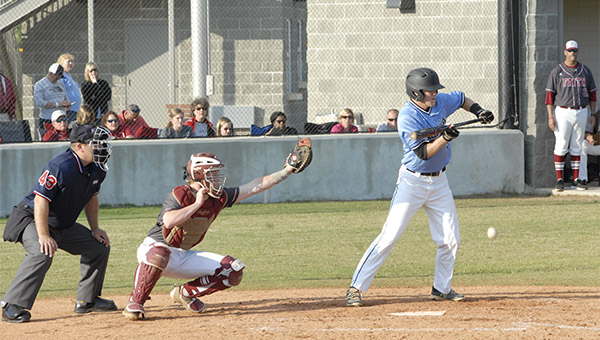 Helena’s Robbie Lively (5) lays down a bunt in game one of the third round playoff series against Faith Academy on Friday, May 6. (Reporter Photo/Graham Brooks)

HELENA–The Helena Huskies baseball season came to an end on Saturday, May 7 in the third round of the Class 5A playoffs at the hands of Faith Academy.
Helena was able to win the opening game of the series on Friday, May 6 but couldn’t manage to win one of the next two games, ending any chance of getting back to Montgomery for the state championship series.

Game 1. Helena 6–Faith Academy 3
The opening game of the three-game series saw Helena jump on Faith Academy early with six runs in the bottom of the first inning, which were all the runs the Huskies needed to capture a 6-3 win.
The six-run first inning was highlighted by a two-run home run by Sam Praytor, RBI singles by Nash Adams and Colton Hood and a two-run double by Robbie Lively.
Faith Academy scored two runs in the top of the fifth inning after Micah Pepper hit a two-run double to cut the deficit to 6-2.
Helena starting pitcher Riley Davis had a stellar outing as he pitched a complete game, allowing three runs and struck out three.

Game 2. Helena 2–Faith Academy 1
Game two of the series was a marathon affair that lasted late into the night, but ultimately Faith Academy broke the tie in the bottom of the eleventh inning to defeat Helena 2-1 and force a deciding game three on May 7.
Despite an impressive outing by Helena starting pitcher Troy Cordrey, the Helena offense couldn’t provide any run support and fell in extra innings.
Cordrey pitched seven innings plus two more frames in extra innings, tallying 11 strikeouts and allowing zero earned runs.
Helena’s lone run of the game came in the top of the third inning after a bases loaded walk scored Connor Hood, but Faith Academy responded the next inning to tie the game 1-1.
Over the course of the next six innings, neither team could push a run across, but finally in the bottom of the eleventh inning, Faith Academy broke through and captured the win on an RBI single by Ryan Bell.

Game 3. Helena 0–Faith Academy 6
In the deciding game three of the series, Helena struggled at the plate and Faith Academy starting pitcher Gabe Shepherd pitched seven shutout innings to help send the Rams to the Class 5A semifinals.
Helena managed to collect six hits as a team but resulted in zero runs scored.
A big third inning by Faith Academy proved to be the deciding factor in the game as the Rams scored five runs that included a an RBI double by Jackson Bell and two singles.

Helena finished the 2016 season with a 36-14 overall record that included winning the Class 5A Area 7 championship.

The Helena Lady Huskies soccer team celebrates after defeating Calera 4-2 in the second round of the playoffs. (Contributed) By... read more