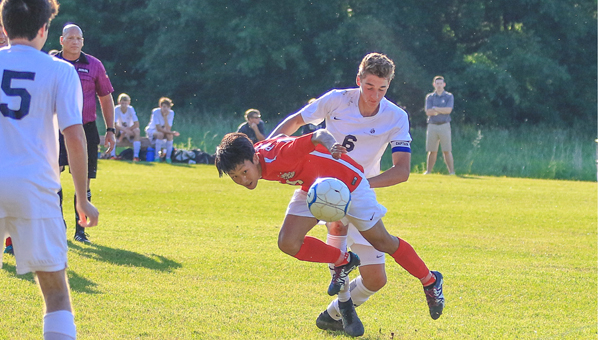 Jack Wilson from the Westminster School at Oak Mountain battles Sean Park of Indian Springs for a ball in the second round of the 1A-3A playoffs on May 7. The Knights beat Springs in a shootout to advance to the 1A-3A Final Four for the second year in a row. (For the Reporter / Dawn Harrison)

NORTH SHELBY – The Westminster School at Oak Mountain Knights won the 2015 1A-3A boys soccer state title, and were one of the best, toughest teams in the state a season ago regardless of classification. That team ran through that postseason, winning its four playoff games by a combined score of 20-1, and capped that momentous season off in storybook fashion. Coming into this season, however, the Knights struggled to find an identity out of the gate in the wake of the exodus of players like Jack Stein, Michael Stanford and John Fitzpatrick, and got off to an 0-4-1 start.

County rival Indian Springs, by contrast, seemed to be the team of destiny this season in the 1A-3A class, jumping out to a 12-0-1 start, including an early season 5-1 win over Westminster. Springs implemented a potent, powerful offensive attack led by skilled, quick and competent forwards and midfielders throughout the regular season, much like the Westminster team from a season ago, and finished the regular season with a 20-2-3 record. After starting the year 0-4-1, Westminster slowly but surely began to put the pieces of its team together, and lost just three more times in the regular season, finishing the year 10-7-1.

After Westminster beat Prattville Christian 5-1 in the opening round of the playoffs and Springs blitzed Holy Spirit Catholic 4-0, the two county rivals collided in the second round for the second season in a row, and for the third time this season. After falling behind by a goal in the early stages of the first half, Westminster scored a late equalizer in the second half to force overtime. Two scoreless overtime periods later, the game headed to penalty kicks, where the Knights beat Springs 5-4 to return to the 1A-3A Final Four, keeping their once-improbable chances of repeating as state champs alive.

“We knew it was a do-or-die game for each team, so the stakes were high,” Westminster head coach Patrick Fitzgerald said. “It doesn’t matter what your record is going into that game because both teams are going to play very, very hard. They’ve been the No. 1 team throughout the season and are a first-class program. I think our kids did a great job preparing not just physically but mentally. We knew it was going to be a hard-fought battle, you throw the records out for games like that.

Springs struck first in the memorable game when Ethan Getman found Sean Park in the early stages of the first half for a goal, giving the 1A-3A top-ranked team an early edge. The 1-0 lead held through the first half and into the second, and in the second half Springs had a golden opportunity to extend its lead and effectively make a comeback impossible with a penalty kick chance midway through the second half.

Senior leader Austin Pack stepped up to the line to take the chance, which Indian Springs head coach Rik Tozzi said is the one he would want taking that shot “390 days a year,” but the chance was denied by Westminster keeper Brodie Winks, which gave the Knights new life.

“That was a rallying point for us,” Fitzgerald said. “If we would have gone down 2-0 it would have been over.”

“Their keeper had to be the MVP of the day,” Tozzi said. “I would have Austin Pack take a penalty kick for me 390 days a year. You see athletes miss penalties at the World Cup, it just happens. I would certainly hope he doesn’t dwell on that, because frankly without his character, competence and leadership we wouldn’t have been there.”

With less than five minutes left in the second half and the season on the line, Jared Keeler finally found the back of the net for the Knights, tying the game in dramatic fashion. Neither team could gain an edge in the waning moments of regulation, and after two scoreless overtime periods, the game headed to penalty kicks.

“I felt confident going into PKs, we practice PKs a ton,” Fitzgerald said. “Brodie had prepared a lot to stop PKs, he did an amazing job.”

Caleb McNaughton, Keeler, Jack Wilson and William Moore connected on the first four chances for Westminster, while Pack, Parker Bryant, Patrick McGuire and Rakim Ali hit on the first four chances for Springs. After Price Leonard knocked in the fifth penalty for the Knights, sophomore Nick Bryant stepped to the line for Springs’ fifth chance. He placed his shot low and to his right, but Winks read the offering the entire way, swatting away the chance and sending Westminster back to the semifinals once again.

“One of the things we questioned early this year was would we have the will to deal with adversity,” Fitzgerald said. “Sometimes skill alone won’t win you a game. I told our kids before the game, we’re playing a great team, but we’ve spent a season trying to make ourselves great.”

“People will look at two missed PK’s and say that’s the reason we lost,” Tozzi said. “That’s not the reason we lost. As it often does with two well-coached teams with great character kids and good players, it comes down to who is more perfect. They were more perfect than we were. Champions find a way to win games that maybe they shouldn’t. You have to give credit to Pat and his boys, they didn’t fold when a lot of teams would’ve.”

Indian Springs finished the 2016 season with a 21-3-3 record, marking the third time in as many years the program has eclipsed the 20-win mark. Westminster moved to 12-7-1 on the year with the win and will now advance to play Bayside Academy in the 1A-3A semifinals in Huntsville on May 12 at 1:30 p.m.

Oak Mountain’s Kennedy Davis is one of the 11 players from Shelby County that will take part in the North-South... read more